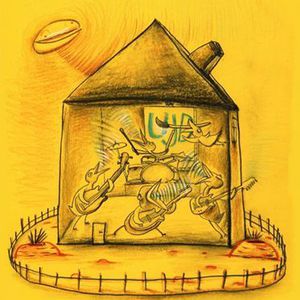 Since forming in Northern Czech border town of Teplice in 1985, Uz Jsme Doma has weathered totalitarian restrictions, numerous line-up changes, and relentless touring all over more than 25 countries, from Moscow to San Francisco, including performances in war-torn Bosnia. They use punk rock guitar bass and drums, mutant saxophone and mournful vocals that express disgust, beauty and loneliness in equal measure. Not snow patrol in other words. Heavily influenced by apparently nothing at all Uz Jsme Doma create incredibly poignant soundscapes one minute and raucous punk the next.

This cd, 15 drops of water, is easily available on import from Amazon, is their best of and is a very good representation of the quality and scope of the band. Fans of Mike Patton and the Cardiacs will recognise similar ideals if not the musical similarity. They explore emotions and feelings that are not commonly addressed in the punk arena. One would think that the lyrics being in Czech would cause some of the message of the record to be lost. Quite the opposite. Miroslav Wanek's vocals are so eerie and mournfully that you can pick up on exactly what he's feeling. Plus a lot of the time the songs are sung cantable style which basically means he sings syllables instead of words. This makes the impact of the songs much more visceral and heartfelt. Plus the translations of all the lyrics are widely available on the internet. And they are incredible. Seemingly inspired by Czech expressionism they are explorations of the human condition. Also when he sings in English, like in the mournful centrepiece of the fuge of ?Hollywood?, it is damn creepy. The interaction of the male and female back vocals also lend to the overall sense of decay and sadness. Uz Jsme Doma's name roughly translates into ?Now we are home? the Czech vernacular equivalent of ?Now we get it?. That is pretty much the way you feel when you listen to the music. It takes a while for it all to gel for you but when it does it really does. Some songs, like jazz 1960 and Ms. Lazy Bones, hit you with instant mentalist punk energy and appeal. Others, like corrosion, however take more time to sink in. There is a good balance between freakiness and thoughtfulness though. Uz jsme Doma have been around for 26 years and this best of is very indicative of the time they have spent labouring at their craft. Thee saxophone is not at all used in the normal ska-style or boogie woogie way customary of regular rock bands. It's a lot more punchy and clinical than usual. The saxophonist Jindra Dolansky is seemingly influenced by Jan Garbarek using his sax as an object of ultimate expression. It all comes together to form a sound not at all common in the modern music arena. So get out there and get yourself 15 drops of water if you want to celebrate 26 of pressing the boundaries of music. It's pronounced ooje-smay-doma.

[Thanks to Sean McTiernan [ http://openyour_thirdeye.bebo.com ] for the paragraph on this band]

This is an incorrect tag for U? jsme doma. If this non-artist appears in your charts, do last.fm and yourself a favor. Fix your artist tags.