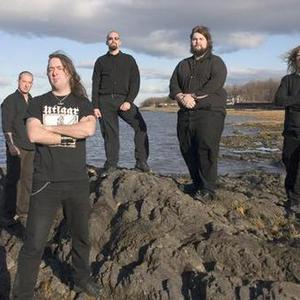 Willing to create a an extreme and original musical project, Eric Ouellet and Jacques Villiard started in October 2001 the base of what was going to become Utlagr. One year later, the formation was completed by Fran?ois C. Fortin on the drums and Sebastien Martel on bass guitar. Utlagr was born and still today, the group consists of these founding members. The name of the group means in old Norse ?outlaw? and its in the honor of Rolfr Utlagr, founder of Normandy our ancestors fatherland.

The name of the group means in old Norse ?outlaw? and its in the honor of Rolfr Utlagr, founder of Normandy our ancestors fatherland.

Utlagr creates aggressive and fast music but still preserving a certain melody, thus giving an epic touch to the compositions. Our music can be described as ?Black Metal? because its musically rooted into the northern european metal style of the 90s. On the other hand, Utlagr is not a clone of the Norwegian bands, our goal is to bring the maximum of originality to our compositions.

Concerning the ideology and philosophy carried by Utlagr, once again we try to dissociate ourselves from the majority of the ?Black Metal? scene. We are not satanic.We prefer to promote Northern paganism because it carry many values that are a part of our everyday life. Still, we dissociate ourselves from a certain trend which give a major place to politics and racial hate. Utlagr does not have any interests in politics, from the left or right spectrum and we do not make the promotion of white supremacy. Do not believe that we assert ourselves as moralizer. Everyone can support and promote the ideas they want but we prefer to stress the defense of the cultural inheritance and our ancestral habits without mingling our way of life with National-Socialism (Nazism) or Fascism. BUT we have a point in common with the rest of the Black Metal scene; hatred towards Christianity and the monotheism in general. We believe that the three great monotheist religions are at the origin of our distance from nature thus leading to its destruction. These religions preaching forgiveness, temperance and humility destroy the force of character and the combativeness of each human being, thus reducing it to the state of a sheep in the herd. We believe that paganism is the solution against the shameful dogmatism conveyed by these beliefs and a healthy way to reconcile itself with Mother-Earth. The gods and goddesses represent what are the most natural feelings of a human bieng: love, hatred, the research of pleasure, courage, sensuality, the force to create and destroy, etc