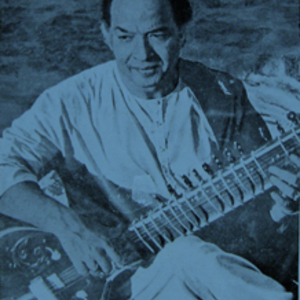 see: http://www.last.fm/music/Vilayat+Khan/ Vilayat Khan (Bangla: ???????? ??-?? Bilaeet Kh?) (b. August 8, 1928?March 13, 2004) was one of India's well known sitar maestros, born in Gauripur in Mymensingh, Bengal (now in Bangladesh). He recorded his first 78-RPM disc at the age of 8, and gave his last concert in 2004 at the age of 75. Vilayat Khan was born into a family of musicians tracing its pedigree generations back to the court musicians of the Mughal rulers.

Vilayat Khan was born into a family of musicians tracing its pedigree generations back to the court musicians of the Mughal rulers. His father was Enayat Khan (1895?1938), recognized as a leading sitar and surbahar (bass sitar) player of his time, as had been the grandfather, Imdad Khan (1848?1920), before him. Vilayat was taught in the family style, known as the Imdadkhani Gharana (school), or Etawah Gharana, after a village outside Agra where Imdad lived.

However, Enayat Khan died when Vilayat was only nine, so much of his education came from the rest of his family: his uncle, sitar and surbahar maestro Wahid Khan, his maternal grandfather, singer Bande Hassan Khan, and his mother, Bashiran Begum, who had studied the practice procedure of Imdad, Enayat and Wahid. Vilayat's uncle Zinde Hassan looked after his riyaz (practice). As a boy, Vilayat wanted to be a singer; but his mother, herself from a family of vocalists, felt he had a strong responsibility to bear the family torch as a sitar maestro.

The Imdadkhani gharana never added the bass string to their sitar, which is a smaller, lighter instrument, easier to handle, than for example Ravi Shankar's. In the 1950s, both Vilayat and Ravi worked closely with instrument makers to further develop their respective instruments, but it was in different directions. As a result, their sounds and playing styles were also wildly different. Whereas Ravi Shankar's sitar was large and veena-like, intended for play across multiple registers using multiple melody strings, Vilayat's was small, with a clean and metallic sound, completely without buzz; it did not reach to the lowest register; and it perfectly facilitated his enormous playing speed. Also, Vilayat liked to perform without a tanpura drone, filling out the silence with strokes to his chikari strings. There was much more going on in his playing than the melody itself.

Some ragas he would somewhat re-interpret (Bhankar, Jaijaivanti), others he invented himself (Enayatkhani Kanada, Sanjh Saravali), but he was first and foremost a traditional interpreter of grand, basic ragas such as Yaman, Shree, Todi and Bhairavi.

When he died from lung cancer in 2004, Vilayat Khan had been recording for over 65 years, broadcasting on All-India Radio since almost as far back and been seen as a master (ustad) for 60. He had been touring outside India off and on for more than 50 years, and was probably the first Indian musician to play in England after independence (1951). In the 1990s, his recording career reached a climax of sorts with a series of ambitious CDs for India Archive Music in New York, some traditional, some controversial, some eccentric. Towards the end of his life, he also performed and recorded sporadically on the surbahar.

Fans and media alike liked to play up Vilayat Khan's rivalry with and animosity towards Ravi Shankar. However, in calmer moments Vilayat would admit there was not much to it. His animosity for the politics and institutions of India's cultural life was another matter. In 1964 and 1968, respectively, he was awarded the Padma Shri and Padma Bhushan awards ? India's fourth and third highest civilian honors for service to the nation ? but refused to accept them, declaring the committee musically incompetent to judge him.

In January 2000, when he was awarded the Padma Vibhushan, the second highest civilian award, he again refused, going so far as to call it "an insult". This time, his criticism had a slightly different twist: he would not accept any award that other sitar players, his juniors and in his opinion less deserving, had been given before him. "If there is any award for sitar in India, I must get it first", he said, adding that "there has always been a story of wrong time, wrong person and wrong award in this country".

Among other honors he turned down was the Sangeet Natak Akademi Award. For a while, he also boycotted All-India Radio. The only titles he accepted were the special decorations of "Bharat Sitar Samrat" by the Artistes Association of India and "Aftab-e-Sitar" (Sun of the Sitar) from President Fakhruddin Ali Ahmed.

"He is the maestro of the sitar who can create musical magic on its strings". As aficionados say, when Ustad Vilayat Khan plays, you are guaranteed and unforgettable melodic experience-a medley of ragas played in the purest classical traditions.