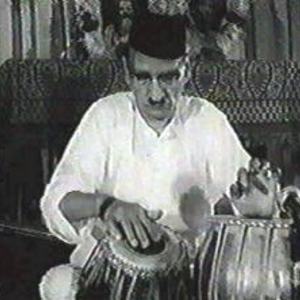 Vocal music lessons were begun at an early age in Moradabad, Uttar Pradesh State where Ahmed Jan Thirakwa was born into a musical family in 1892. His father trained him on the sarangi while his uncles - Sher Khan, Faiyaz Khan, and Bashwa Khan - gave early tabla lessons. Ahmed Jan was drawn to the art of tabla playing after hearing a live performance by Ustad Munir Khan; who he became a student of when he reached the age of twelve.

With barely six hours of sleep between practices and a strict but rich diet of nutritious food and milk, Thirakwa - under the grueling tutelage of his guru - put everything he had into honing his talents. During this time, he also accquired his nickname - "Thirakwa" - meaning "shimmering thunder"; a reference to how Ahmed Jan's fluent fingers "danced on the drum".

At the age of sixteen, Thirakwa made his debut appearance in Khetbadi, Bombay, India - an outstanding performance that - seemingly overnight - made him a much sought-after performer. A master over most of the different tabla gharanas, Thirakwa was a pioneer of solo tabla playing - an artform in its own right.

In 1936 he was appointed as a court musician of Rampur, where - during the next thirty years - he would play alongside some of the greatest musical talents of the time. He then went on to become a professor and Head of the Tabla Faculty at Lucknow, Bhatkhande College of Music, where he worked until his retirement. He died in 1976, heralded as one of the greatest tabla players of the 20th century.

The Genius of Thirakwa