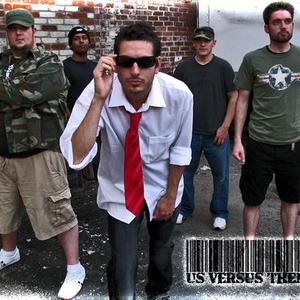 *UPDATED BIO 2011* Us Versus Them (UVT) is a metalcore band from Winthrop, Massachusetts. Winthrop is also home to iconic metal band Unearth. Us Versus Them shows that there is no lack of metal talent in the tiny suburb of Boston. UVT was established in late 2007 when singer/songwriter Matt Romero joined forces with high school friend and guitarist Rich Noe. Rich had been a member of ?Days Gone By' who had notably toured with All That Remains. The two recruited Vaz Curpen on lead guitars and John Malzone on bass to become original members of UVT.

UVT was established in late 2007 when singer/songwriter Matt Romero joined forces with high school friend and guitarist Rich Noe. Rich had been a member of ?Days Gone By' who had notably toured with All That Remains. The two recruited Vaz Curpen on lead guitars and John Malzone on bass to become original members of UVT. Levi Ali completed the puzzle by joining the band on drums.

The band fired out of the gates recording two full length albums that touched upon political, spiritual, and relationship struggles. The band started playing numerous live shows to establish and grow their fan-base.

UVT has shared the stage with well-known acts such as Ice Nine Kills (Ferret), Dr. Acula (Victory), Signal The Escape, and Remember Tomorrow.

In mid 2010 the band went back into the studio to record their latest album ?Seven Stations? which was released in March 2011.

UVT makes it a point to connect with their fan base and always keep them close by their side. They know without the support their music falls on deaf ears. The band continues to work hard to make a name for themselves. If nothing else, their sheer determination, will make them successful.
-=-=-=-=-=-=-=-=-=-=-=-=-=-=-=-=-

1/30/11 - We'reeeeeeee baaaAAAaaaccckkkk!!!!! Us Versus Them returns for good!! The Boston metalcore band Us Versus Them has reunited with all its original members (except for the drummer for now)

And that's not all!!!! We are releasing a brand new full-length album 'Seven Stations' next month!!! The new CD has been completed and will be available on i-Tunes and other sites/stores soon.

In the mean time check out our trailer for Seven Stations on YouTube!!! Right here:
http://www.youtube.com/watch?v=PWPFHqjqYCU


**YouTube video - History of Us Versus Them, Boston, MA, USA** A quick look at the evolution and history of the Boston based band Us Versus Them founded in 1999 by singer/songwriter/producer Matt Romero... http://www.youtube.com/watch?v=6ZcVGFQtENM

This Us Versus Them is actually the second iteration of the original UVT created by Matt Romero in 1999 and the first band lineup formed in 2006 you can hear the original trio's rock debut with After The Drama here on Last.FM as well

As for this metal lineup featuring Tim Lillis on drums, Rich Noe and Vaz Curpen on guitars and John Malzone on bass (of course Matt on vocals/lyrics) was formed in early 2007 and the group released 2 full-length albums to positive reviews and much fanfare. 'We Will Expire' and 'Unknown Futures' both received some attention from the metal community and the band played shows until end of 2008 where the lack of promotion and label search slowed the band down to eventual end and UVT was forever gone for good.

Matt Romero has gone on to pursue a solo career releasing 2 studio EPs (search 61 for him) and the rest of the band went on to form 'Dead Light Inside' a harder hitting metal band playing around the east coast currently with a new singer.

Any questions about this metal version of Us Versus Them please email longv@comcast.net

Albums are only available @ The Sixty One - http://www.thesixtyone.com/uvtmetal/

Us Versus Them formed in 2005 and released their debut album After The Drama in 2006. Playing several shows around the Boston area, the trio disbanded that same year with their last show played at the Abbey Lounge on Halloween.

Each member has gone on with their own projects. Jon Ulman now plays for Common Thrill and Pawnshop Diamonds, John Malzone plays in the metal band Dead Light Inside, and Matt Romero has gone on to do a solo career http://www.last.fm/music/Matt+romero and working on his 3rd studio album titled 'Green Light'

For more info on the original Us Versus Them drop us a message and please be sure to check out their debut album available on i-Tunes, Amazon and more!! -Thank you.

Us Versus Them are a hardcore punk band from Fife, Scotland.
Taking influences from seminal 80's hardcore acts such as Agnostic Front, Cro-Mags and S.O.D and creating their own blend of modern hardcore.

Us Versus Them based in Boston, MA, USA is a project founded by Matt Romero in the Winter of 1999. You can now find him as a solo artist on http://www.last.fm/music/matt+romero

Us Versus Them was also a now defunct Australian band.