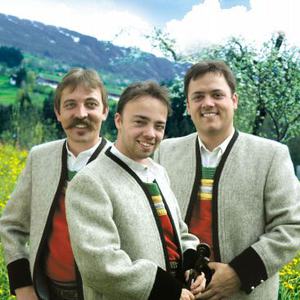 Ursprung Buam is an Austrian folk music trio from Zillertal, Tyrol. One of the most popular touring groups in Austria, Ursprung Baum often tours Germany, many places across the European Union, as well as the Tirolean festival scene. They have had over twenty releases since 1998. Most of these albums have held strong positions on the Austrian popular music charts. The group consists of brothers Martin Brugger (born December 11, 1976) and Andreas Brugger (born December 29, 1978) and their older cousin, Mannfred H?llwarth (born April 5, 1962).

Founded in 1993, the trio is widely considered Austria's number-one folk music group; in 2001, the group won the Austria Music Award - Amadeus in recognition of its status.

Ursprung Buam means "Origin Boys" in the Austro-Bavarian dialect of German; the trio's song lyics are also in this dialect.

Martin Brugger plays the fiddle, and Andreas Brugger the accordion; H?llwarth plays the bass and harp. The group cultivates the art of yodeling in its songs, which focus on the Zillertal region.