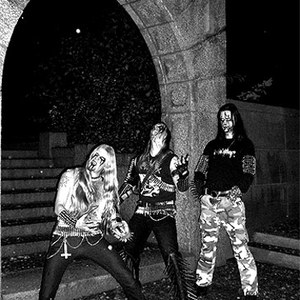 
-2- URN (U.S.)
URN actually has its beginnings as far back as 1994 in Cleveland, OH. Founder, Dominic St. Charles, while attending college had been working in commercial radio upon his graduation, and was heavily involved in two bands. URN being very much a death metal incarnation along the lines of a Sepultura and Napalm Death type of vein (Dominic was not the singer however). URN would play heavily in the ?rust-belt? area having done many shows in the metal scene, and it opened for a couple of national acts as part of local festivals sponsored by larger rock radio stations.

Around the same time, he also had a gothic-rock, Sisters of Mercy, type of band called Sacrosanct, in which the famed occult novelist, Michelle Belanger, was the lead singer. Sacrosanct had also worked along with Ed Douglas (who later went on to found Midnight Syndicate) on several endeavors. Due to an unforeseen accident in 1996, one member suffered an injury that sidelined URN for a period at the time. It was essentially the end of that line-up, and Dominic would then find work playing lead guitar for a couple of national acts. Most notable of these was for The Electric Hellfire Club.

This incarnation of URN began back in 2000, while Dominic was still an active member of The Electric Hellfire Club. For the most part, despite his great experience with the EHC, he felt it was time again to pursue his own thing. He made a hybrid of the two bands, and Thomas Thorn urged him to use the URN moniker once again.

After Dominic fulfilled EHC tour obligations, URN then went out on two tours in 2001. Once in the spring, with the Babylonian Tiles, and then in the fall with Gossamer, which had been affected by the events of September 11th.

The band recorded and released a maxi-single called Consecrated Ashes to assist in touring for 2002.

In 2003, the band followed up that release with the Desecrated Ashes EP, and was met with great success and acclaim. The album received strong airplay support, via college and internet stations, all through the United States as well as in Mexico and Canada. URN has also done several simulcasts with internet radio stations such as IPM Radio and Metal Works Radio.

URN signed with Rotting Corpse Records in the fall of 2005, and released their full-length LP, Dancing With The Demigods, with major chain-store distribution through Century Media, Synergy Distribution, and Azure Green in July 2006. The album has received rave reviews in many major trade magazines such as: Pit Magazine, Explicitly Intense, New Witch, Dark Realms, The Ninth Gate, Brave Words and Bloody Knuckles, and many more.

The band has also appeared at many high-profile conventions throughout North America such as: Ancient Ways in Chicago, KiNvention North in Toronto, Endless Nights in New Orleans, Radio Active in Detroit, GenCon in Indianapolis, The International Body Art Expo in Columbus, Paganstock in Michigan, Doomsday Metal Festival in Milwaukee, and the Long Black Veil in New York.

URN was able to get their music to appear in television programs such as A&E Biography's ?The Secret Life of Vampires? through their ongoing collaborations with artists Michelle Belanger, noted author of the Psychic Vampire Codex, and actor Don Henrie, of Sci-Fi Channel's Mad, Mad House. Both of these esteemed friends appear in URN's video for their single, ?Shadow Dancer?, which is being nationally distributed to many different channels, and is also available on the album as well.

Dawn Of The Devastation

Dancing With The Demigods