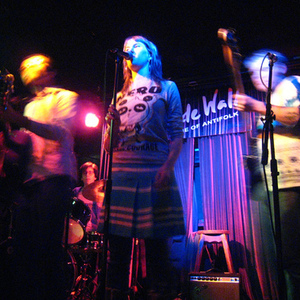 Urban Barnyard only sings songs about animals in the city. Considering this restriction, their oeuvre betrays a remarkable breadth! Their sound ranges from the anthemic to the sentimental. If their stylistic variety doesn't satisfy you, then watch in wonder as they trade instruments on virtually every song, regardless of which instruments they actually know how to play. It all started when Phoebe Kreutz, Dibson Hoffweiler, and Dashan Coram wrote "Horsies in the City," about horsies in the city.

It all started when Phoebe Kreutz, Dibson Hoffweiler, and Dashan Coram wrote "Horsies in the City," about horsies in the city. The band was born, and adopted fellow anti-folkers Daoud Tyler-Ameen and Casey Holford to add rhythms to Urban Barnyard's otherwise-twee demeanor. Soon enough, the band stopped sounding like a big joke, and started sounding pretty freaking awesome, so Dashan fired himself in protest.

Since then, the Urban Barnyard quartet has surprised everyone by becoming New York Anti-Folk's tightest indie-rock ensemble since...okay, so NYAF has never boasted any particularly tight indie-rock bands. But between scene-alumns The Moldy Peaches and Regina Spektor, Urban Barnyard's shockingly fascinating songs about the metropolitan crises of the modern non-human animal stand out as epic accomplishments of sensitivity and weirdo-ism. Fans of wit, rock, and a playful spirit - Urban Barnyard is here to milk your soul. (written by Dan Fishback)