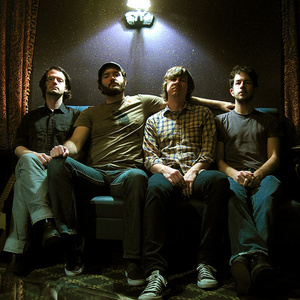 Up The Empire was formed in the summer of 2004 in Brooklyn, NY. The band has shifted all gears towards crunchy, dynamic and tight rhythms with playful guitars and super melodic vocals. Up The Empire opens things up to multiple voices allowing room not just for singer/bassist Dan Hewins' aggressive, almost J. Robbins-ish, voice but singer/guitarist Doug Keith's rattling, J. Mascis type voice to saturate the songs.

In fact, the only member of the band that's not always attached to a mic is drummer Ben Lord. He's a hard-hitting drum-pounding machine whose sound is often described as being Bonham-esque, making little to no time to worry about vocals. Prior to Up The Empire, Ben was the drummer for Louisville's post-hardcore darlings Elliott and before that, Falling Forward.

Up The Empire recorded their debut release, the Seaside EP (released Feb 07, 2006), with various producers. For "Stars at Noon" the band went to Dean Baltulonis (The Explosion, Paint It Black) at Atomic Studios; for "Starfuck" and "Recover" Jay Pellicci (Deerhoof, Erase Errata) flew in from San Francisco to work with the band at Seaside Studios; and for the big and open "Careful What You Say" the band recorded themselves in their Brooklyn rehearsal space, where they could best capture the laid back, yet intense, nature of the song.

The Seaside EP is full of stick-in-your head dynamic noise-rock tunes that alternate in tone from intense and moody to airy and upbeat, and all with lyrics that aren't afraid to let it all hang out. From the quiet and brooding disc opener "Careful What You Say" to loud and bone-crushing "Stars at Noon", they're just giving you a little taste of what they're capable of.

In March, 2007, the band released their first full-length album, Light Rides The Super Major, to the eagerly awaiting public. Light Rides The Super Major was recorded with Jim Bentley at the Fort in Brooklyn and has 10 songs of hard-hitting, melodic powerhouse songs. With trips to California and along the eastern seaboard to promote the release, Up The Empire is woodshedding again this summer to write the next release, tentatively due in the fall of 2007.