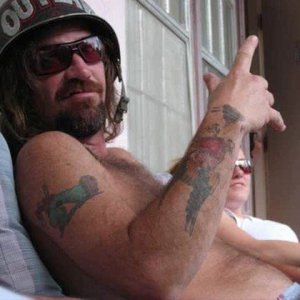 "Unkle Matt and the Shitbirdz" founded a glam rock band called Medea in 1984, but by 1987 the band dissolved because the bass player wanted to go be a mortician. After playing a sold out show at the Hotel Regency, everyone said Fuck You to each other and all went their seperate ways. Unkle Matt then moved to Maryland with his bitch ex-wife who is a complete whore, and began a 16 year stint making 2 liter bottles for Coke and Pepsi. After finally figuring out that his job and wife completely sucked ass, he lost his mind and joined the 2002 Guns n Roses/CKY tour as Jess Margera's drum tech.

(he really is an uncle to Bam and Jess Margera). When that tour ended, he started building a studio at Bam's 14 acre estate in West Chester, Pennsylvania converted from old horse stables. That studio is now known as the Hobbit Hole and is now where Bam broadcasts his show on Sirius Satellite Radio. In between taping radio shows, Matt started tracking a couple songs that easily could make Willie Nelson, Meatloaf and Elton John all shit their pants. In 2006 he produced Gnarkill's second album appropriately titled "Gnarkill vs. Unkle Matt & the Shitbirdz" where he contributed the songs "Shitbird Serenade" and "Urine (big trouble)". The feedback he recieved from those songs made him feel like he was shoveling Golden Coal into a Gravy Train riding on Biscuit Railroad Tracks. That feeling soon provoked a record full of gems like "Shitty Shower", "Bent Boner" and the sweet sounds of "Jackin Off While Crying" (which is based on a true story). He needed to get an album out, he owed it to the people, god damn it.