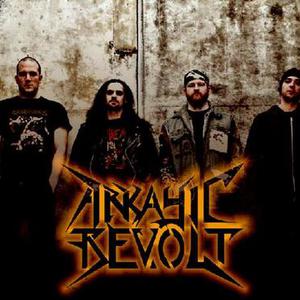 Formed in early 2008, Arkayic Revolt was the offspring of a pre-existing metal band that had lost its way, and the surviving band members decided to create something new, heavier, faster and more ferocious than its predecessor. Arkayic Revolt conveys their brand of thrash metal to the masses, keeping it honest, real and breathing new life into an old genre. Spearheading the Revolt is: Darryl Fletcher - Lead Vocals, Guitars, Bass Mike Hartigan ? Backing Vocals, Guitars Eric Ferns ? Drums

Hailing from the stifling, industrial border city of Windsor, Ontario, Canada, the method to Arkayic Revolt's sonic madness is a cess pool of various metal ingredients. They have learned their war craft from Bay Area forefathers such as Testament, Forbidden and Exodus, while perfecting it with skills from European thrashers such as Kreator, Destruction and Artillery. The primal aggression of their sound is laced with melodic elements, and also draws influence from more groove oriented bands like Pantera.

Having released their debut independent recording in early 2009, a seven track EP entitled ?Undead Man Walking?; Arkayic Revolt has been praised in reviews from heavy metal press, and has received radio play from stations across the globe. Their ?Undead Man Walking? EP has given them an ever growing worldwide fan base in the metal underground, and attracted the attention of Punishment 18 Records (Pitiful Reign, Ancient Dome, Methedras) who have signed the band to their label for the release of a full-length album entitled ?Death's River? in early 2010.