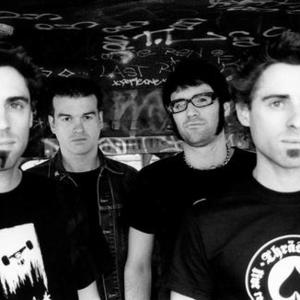 The story all starts on the east coast of the U.S.A., the twins Trint Eastwood (Vocals/Guitar) & Daff Lepard (Drums/Vocals) were born in Washington D.C. followed up by M?tor Ed (Vocals/Guitar). But its when they all arrived in Serrieres France, a little town south from Lyon, that these three bros met Jim (Bass/Vocals). After watching Skateboard videos, slamming on some concrete, and the adrenaline rush of listening to punk rock music things started to change.

Records by bands like NOFX, Bad Religion, H?sker d?, and Decendents started to mix with those of Nirvana, Metalica or the Pixies, and the need to start a band finally got to tough to be put aside. In the year 2000 the band signs to the French label Wagram and releases their first EP Welcome to Shortly after in 2001, the band flies over to San Francisco, the Fat Wreck Chords temple of sound. They move into the Motor Studios to record their first full length album Vote for me with Producer Ryan Greene (Nofx, Lagwagon, No Use For A Name, Bad Religion, Megadeath) After touring Europe for one year, the band flies back to Chicago, this time to record an acoustic 7 track EP called Kill the fuse at the Electrical Audio Studio with Steve Albini (Nirvana, Shellac) By doing this the Uncommonmenfrommars show they are more than just a little skate punk band. In 2004 comes the second full length album, Noise Pollution once again produced by Ryan Greene at Motor Studios, this album is seen by many as a reference in the European Punk Rock Scene. The tour that follows puts the band in some of the greatest festivals such as the Deconstruction Tour, The Dour Festival in Belgium, the Fury Fest of le Mans in France On Stage their energy and the fun they share brings them to the level of the best bands today. Playing live is what Uncommonmenfrommars are best at, the proof of this would be the Live on Earth album recorded in Paris on June the 5th 2005. Meanwhile the opening of new horizons become clear with the label Angelina Records introducing Uncommonmenfrommars to Japan in November 2005, also a Split 10 track CD with the Burning Heads Incredible Rock Machine on Opposite Records in France in October 2005 bringing an older Punk scene to merge with the new. Uncommonmenfrommars get back with Ryan Greene in December 2005 for a new album Scars Are Reminders. Exit Motor Studios and enter CRUSH Recording in Pheonix Arizona, where Ryan now works his sound. The 13 songs on this record only confirm the fact that the Uncommonmenfrommars have more power than ever, better song writing, and more energy. Still very Punk Rock with songs like I Dont Care and This Place Is Infected, but also very Rockn Roll and even Power Pop with references to bands like the Foo Fighters or Alkaline Trio, heavy and fast rifs that fly in songs like Dead Inside or Scars Are Reminders The result is high over hopes and once again they hit where no one was ready for it, taking everyone by surprise again. The art work was to be done by Chuck Sperry at the Firehouse Kustom Rock Art Company S.F., he who had already done the art work for the Live On Earth CD and double DVD. Using their own self made structure U.F.O. Productions to self finance this record, Uncommonmenfrommars negotiate a license deal with the French label At(h)ome for full European distribution.