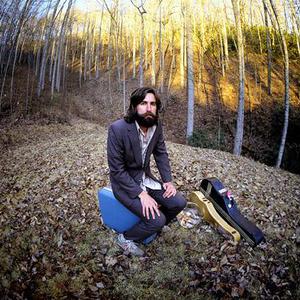 Tyler Ramsey's hometown of Asheville, North Carolina features a music scene where a tight-knit community of players always share the stage, and no one is in just one band. Amid all the recording studios, listening rooms and PBR-fueled bars of Asheville, Tyler stands out. As a formidable talent on guitar, piano, bass, percussion, and vocals, the name Tyler Ramsey has become synonymous with awe-inspiring talent, taste and style.

Ramsey is best known for his guitar work. Crafting delicate, finger-style guitar picking reminiscent of John Fahey and Leo Kottke, but with a sum effect that is all his own. Indie folk, Country Blues, Finger style guitar ? Ramsey is a composer of intricate, ethereal songs of melancholy and rumination. Tyler has spent his life perfecting and honing his sound. It's been a journey that has taken him through many different genres of music, numerous and varied bands, and all around the world. While living in the mountains of Western North Carolina he immersed himself in the varied folk styles of the area. Inspired by the traveling country blues musicians that used to pass through the mountains, Tyler spent his time experimenting with his piano and guitar playing while continuously honing his craft as a songwriter and instrumentalist. He is an award-winning multi-instrumentalist who is always willing to sit in with friends or jump on board a promising project, no matter what the musical style. He's toured the country with many projects, but these days, Ramsey is making his own material top priority. "My solo work has always been my focus," he admits. "Even during those times I spent contributing to other bands."

Ramsey is quick to admit that being in front of a receptive audience is way up on his list. Possibly second on the list, a definite true love, is holing up in a studio. Tyler's latest record was tracked at Echo Mountain in Asheville. The studio with its beautiful stained glass windows and impressive gear list provided Tyler all the tools he needed to fully realize his songs. The overflowing pool of musicians in town also allowed for all manner of friends and players to stop by to contribute. "Being in that environment where you can do anything with the songs you have created is amazing," he enthuses.

In 2008 Tyler Ramsey toured with Band of Horses where he played his own songs as the opening act and as a member of Band of Horses.

Found A Picture Of You

A Long Dream About Swimming Across The Sea