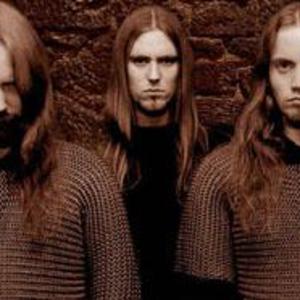 The twin obscenity's strong roots go back to the winter of 1991 when singer/guitarist/keyboardist Atle Wiig met bassist Jo-Arild Toennessen, who had previously been playing with drummer Knut Naesje. A quick formation ensued, and after auditioning a small number of extra members, they decided to stay as the original three-piece, thus bearing Twin Obscenity. Over the next few years they recorded three demo tapes, which furthered their reputation as one of Norway's most talented black/death metalbands.

Their ?93 recordings Ruins and Behind The Castle Walls were more in the vein of classic death and doom metal, whereas Revelation Of Glaaki marked the band's turning point in 1995. Having already developed the shadowy foundation of their majestic and atmospheric blackmetal style, the band mixed a lot of groove and melodic keyboards into their sound, immediately adding the senses of intelligence and advancement to their creativity. Twin Obscenity's debut album, Where Light Touches None , was released in the summer of ?97 on the Norwegian label Head Not Found, and received very enthusiastic reviews in the press while spreading the band's name quickly throughout Europe.

After the band signed to Century Media Records in the beginning of 1998 they recorded their second album, For Blood, Honor and Soil. Working their way through numerous moods and image settings, Twin Obscenity's power and whirlwind-like capabilities are matched equally with striking passages containing triumphant keyboards and angelic, melancholy acoustic overtones. Well constructed and restrained guitar leads and melodies, not often found in today's black metal realm, also give For Honour... a very welcomed, distinguishable and memorable feel. Continuing to set positive examples of growth and creative experiment, while still delivering some of the darkest extreme metal around.

For Blood, Honour And Soil