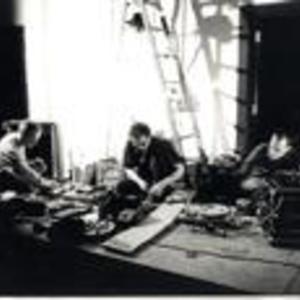 The American trio TV Pow arose from the laptop music culture in the late '90s. Their use of invented instruments, turntables, synthesizers, and state-of-the-art laptop computers gives their music an idiosyncratic quality that matches the fuzzy personalities making it. Members list as influences people as diverse as Otomo Yoshihide, Merzbow, Morton Feldman, Iannis Xenakis, Johnny Cash, Marvin Gaye, and the Melvins.

What brought them the most recognition from experimental music circles were the 2000 Staalplaat CD Being Nice Is Funny and their collaboration with Stilluppsteypa, We Are Everyone in the Room (2001, Erstwhile).

Michael Hartman, Todd Carter, and Brent Gutzeit have known each other since college. While attending Western Michigan University, they played in Pencilneck, an improvisation unit, and Liminal, a group of drone and experimental music based around instruments of Gutzeit's design. In 1995, he and Hartman started TV Pow while staying in Tokyo. The name may come from an obscure video game television show from the early '80s. When the two came back to Chicago a year later, they were joined by Carter and recorded their self-titled debut cassette for Gentle Giant Records.

From 1997 to 2000, the group accumulated compilation appearances, singles, EPs, and live performances in Japan, Europe, and the U.S., building a cult following on the minimal techno scene. Things opened up in late 2000 with the release of Being Nice Is Funny as part of Staalplaat's prestigious series Mort aux Vaches. The avant-garde institution suddenly took note of their experimental sound, very close to continental European artists revolving around the labels Raster-Noton and Mego. Their collaboration in 2001 with the Icelandic laptop trio Stilluppsteypa (championed by the U.K. magazine The Wire, among others) gathered excellent reviews. The same year, the group started its own label, Not for Profit, releasing the mammoth 50-CD-R spindle album Don't Talk, Play (an answer to Merzbow's Merzbox, perhaps?).

TV Pow spawned a number of off-shots. Each member has a side project: Aerospace Soundwise (Carter), Wheaton Research (Gutzeit), and Black Dot (Hartman). Plus, the three members were involved in the one-shot ensemble Television Power Electric and contributed to the ambient collective Medium.