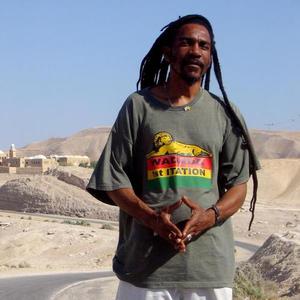 Reading the credits for much of the current roots reggae releases emanating from the U. S. Virgin Islands, one name recurs quite often and for good reason. In the hands of Tuff Lion rests probably the most significant reggae guitar voice being recorded today. On any of the current releases which he appears, you will find a very decidedly determined and ?deadly stiff? rhythm guitar skank being fused in between the low bubble of the organ sound and the choppy piano chords. Check for that crystalline cutting sound that has a precise two beat rhythm to it.

A closer listen will have you wondering if this sound is going to lace your eardrums with razor cuts. ?That? is the guitar work of Tuff Lion. While much of the reggae being produced today is rather machine oriented and lacking the traditional rhythm guitar, the ?Neo Classical Roots? movement of the Virgin Islands has insisted on maintaining that standard. Tuff Lion has proven the same commitment to the ?vintage? sound of roots reggae in this modern era. - This is Trebuchet MS
What Tuff Lion describes as ?the drive? force of his guitar technique is to simply play the instrument with a commanding control. ?The timing sequence is everything?, he says, in describing how he is able to allow so much actual note content to be released from his guitar chords as opposed to simply muting all the strings and faking a hand movement. The opposite of this method is to lay upon the chords longer and to sustain the chord notes up to and beyond the piano chord lengths. Tuff Lion's percussive strikes are precise and symbiotically synchronized to both the hi-hat cymbals and the piano. He further explains that his impression is that a rhythm guitarist should try to view their role as a ?harmonic percussionist?, that should ? keep it in the pocket ? to solidify the groove. - This is Verdana

While Tuff Lion has earned his marks for that soon to be trademark rhythm skank, other points of distinction lay in the improvised embellishments and hiccuping accents he throws into the song brews. Slides, harmonics, chordal hammer-ons and single note trills are all equally and tastefully applied. Discreetly mixed into some of the releases on what is known as the ?stuckin? track, Tuff Lion weaves cleverly crafted polyrhythmic lines above and around bass lines that increase the undercurrent rhythms in the tracks. - This is Arial
The total package comes together when listening to any of the solos that he has recorded. These are not ?played to the bar? excursions, but heartfelt emotional expressions that are always closely related to the vocalist and the lyric. Tuff Lion's ?answers?, are straight from the blues tradition, which are colorful and rich with a broad pallet of variations. They are virtual translations from the spoken word, through the guitar, to us. Most of his works are recorded without the distorted rock tone that has become too popular with ?a lot? of reggae guitarists today. While you may occasionally hear a wha pedal or a phase shifter effect, Tuff Lion declares that the most consistent effect he uses is a cautious amount of reverb, preferring to keep his guitars signal path clean. It is from this stark set up that emerges the essence of the pure guitarist. Tone and vibes from the hands, not from effects. Steel and nylon string acoustic guitars have helped Tuff Lion add an organic sound to recent recordings as well as re-introducing these sounds to the roots reggae audience. - This is Times New Roman

Tuff Lions phrasing vocabulary includes very delicate acoustic flutters, smokey jazz riffs to blistering clean and authentic biting blues styles. These are some of the flavors this very disciplined musician possesses and dispenses with a modified Gibson Les Paul Smartwood ? guitar. A Mesa-Boogie Mark IV ? amplifier does the rest. - This Is Comic Sans
A veteran of countless live performances and tours as a bandleader or sideman over his long career, Tuff Lion's recording presence has ?finally? begun to blossom with the access that home recording studio systems afford the masses today. Undeniably, he has risen from near obscurity to many V. I. producers' ?A? list. You may also see his name credited on some recordings to performances on other instruments such as, bass, keyboards, organ, drums and some backing vocals. This is indicative of the depth of his musical scope. ?I-Man play instruments for the sake of music, not the other way? says the graciously humble Tuff Lion, noting that he ?really only practices? on the guitar. - This is Tahoma

Guitarists and musicians of this caliber are what make this music sparkle and feel so good again. This is what the ?root? of anything is about?that which comes from the heart. Please forward through the menu and become further acquainted with this ?roots renaissance? man. This Is Papyrus