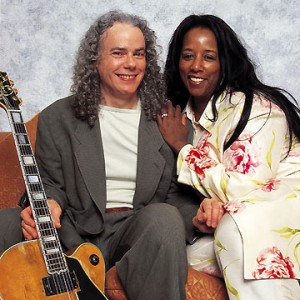 Tuck & Patti, that's Tuck Andress and Patti Cathcart - a couple that have been making music together for over 25 years and who released ten albums flavoured with jazz, pop, rhythm and blues, gospel, folk, rock and Brazilian genres since 1988 as a duo. Patti hails from San Francisco and knew from the age of six that she wanted to be a singer. She started to sing in church, directed choirs by the age of 10 and received voice lessons in high school.

Patti hails from San Francisco and knew from the age of six that she wanted to be a singer. She started to sing in church, directed choirs by the age of 10 and received voice lessons in high school. As she was raised in the Bay Area in the 60s she was influenced by all the styles of music going on and places like The Fillmore were second home to her - even Bill Graham watched out for her. Patti jammed with hundreds of musicians during that time and learned how to improvise in any style. Some might remember that Patti was one of the founding members of Kingfish - featuring Bobby Weir, Matthew Kelly, Dave Torbert, Barry Flast among others.

Tuck hails from Tulsa, Oklahoma and was influenced by swing and classical music from an early age but it wasn't until the Beatles and Rolling Stones came out that he knew he had to play rock and roll. Because Tuck's sister had taught him how to play the piano he started with that instrument but soon decided that the guitar would be a better choice. Although Tuck was influenced by rock music he started to learn complex jazz chords instead, simply because he had the Mel Chord Book, with 400 Orchestral Chords in the appendix, at hand. When he heard Jimi Hendrix for the first time he was not only blown away, he considered it impossible for him to come up with such a sound himself and he dived even deeper into jazz.

In 1970 Tuck enrolled in Stanford where he would later major in music and played in several rock and jazz bands at the same time. He even went to Los Angeles to play in bands and took the guitar position for the Sonny and Cher TV show for some time - but decided to leave the L.A. scene before it could swallow him. Instead he headed to the Bay Area where he would play in top 40, soul and rock bands or practice and listen to music 8 to sometimes 14 hours a day.

In 1978 Tuck was playing in a band Patti came to audition for. Once they met they immediately knew they had found their musical soul mate (and partner in life). Since the band didn't happen Tuck and Patti decided to work as a duo and their instant success in the Bay Area proved that their formula that every song had to speak and be played from their hearts worked. Ten years later they would release their first CD Tears Of Joy and the rest is history as they say. Tuck & Patti have become a well known act worldwide - especially in Europe and Japan.

That's also the reason why their CD A Gift Of Love got released. They actually produced this album for their fans in Japan who wanted to hear Tuck & Patti's interpretations of classical love songs. The album turned out to be yet another success, once it was released in Japan it had to be released in Europe as well. Last but not least, 33rd Street Records released the album in July 2004 for the American market. What does this tell us? Simply that good music will always find its way.

Andress' neice is singer-songwriter Annie Clark who performs under the name St. Vincent.

A Gift Of Love

Learning How To Fly

The Best Of Tuck & Patti