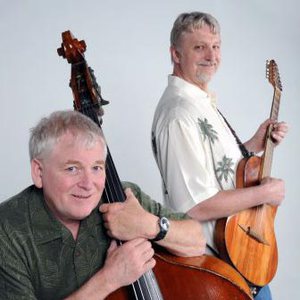 Trout Fishing in America is the long-standing musical partnership of Keith Grimwood and Ezra Idlet. The name taken from a Richard Brautigan novel, seems almost as incongruent and intriguing as a picture of this musical duo - Ezra Idlet (guitar) stands six feet nine inches and Keith Grimwood (bass), five feet five and one half inches. What is more intriguing is the musical career these two have carved out in three decades of writing, recording and performing together. Trout Fishing in America can look back at a body of work that is impressive and know they are just hitting their stride.

On the heels of their fourth Grammy nomination Big Round World, and the release of their second children's book/cd Chicken Joe Forgets Something Important, it is no wonder that Trout Fishing in America sees the future as the brightest part of their successful career.

A brief history of Trout Music: Grimwood's professional musical experience began when, as the precocious teenage bass player, he began sitting in with jazz musicians who had socks older than him. Always the good student, he earned a degree in music from the University of Houston and then quickly landed a position with the Houston Symphony. By that time Idlet had given up his spot on the bench of a local junior college basketball team to pursue a life of rock & roll. It was shortly thereafter that Idlet and Grimwood met as members of the Houston based eclectic folk/rock band St. Elmo's Fire which became the perfect percolator for Trout Fishing in America. As St. Elmo's dissolved in 1979, Trout Fishing in America was officially born. Idlet and Grimwood had become best of friends and musical partners.

Success happens when opportunity meets preparation. After years of accumulating original songs and polishing their performance TFIA was ready when the CD revolution took place. TFIA was in the first wave of artist owned labels (Trout Records) to successfully record and market their own music. Their infectious mix of folk/pop and family music is tempered by the diverse influences of reggae, latin, blues, jazz and classical music. TFIA recordings have garnered three National Indie Awards and multiple Parents Choice Gold and American Library Awards as well as 4 Grammy nominations. TFIA has also expanded their touring territory to over forty states and several Canadian provinces.

Sharing knowledge and encouraging art has become another musical mission of TFIA. In the past few years they have developed a variety of song writing workshops for teachers and students which illustrate how art and music come from the fabric of everyday life. Their willingness to make fun of our most annoying and sometimes disgusting habits in one song then touch our hearts with tender and passionate images of family life in the next is what makes the connection between Trout Fishing in America and their audience so real.

Merry Fishes to All

Who Are These People?