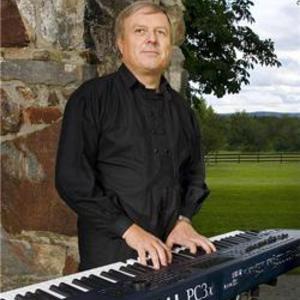 "If my music helps people in their daily lives, I have accomplished more than just entertainment." Tron Syversen Tron Syversen is a pioneer in the growing Northern-European new age and relaxation music community, and his catalog of nine stunning albums is quickly being discovered in the USA and worldwide. Encouraged by his musics growing popularity, Syversen is evermore inspired to serve peoples everyday need to be soothed, relaxed, healed and uplifted.

Tron Syversen is a pioneer in the growing Northern-European new age and relaxation music community, and his catalog of nine stunning albums is quickly being discovered in the USA and worldwide. Encouraged by his musics growing popularity, Syversen is evermore inspired to serve peoples everyday need to be soothed, relaxed, healed and uplifted.

Born near Oslo, Norway, Syversen witnessed his mothers talented devotion to piano, and began his own piano lessons at age 7, following with trumpet lessons a few years later. As his musical interests and technical skill progressed over the years, he made the most of every opportunity to study and play music from Classical, to Jazz, to Big Band. Along the way, he studied with trumpeter Eckhard Baur, a member of the award-winning Geir Lysne Ensemble, and served in Norway's Royal HM the Kings Guard Band.

Syversens Christian parents always encouraged his faith in a higher being, a part of his life that became ever more important as he moved into adulthood. He remained close with his family, and took on more responsibility in managing their furniture business, acknowledging gratitude that this afforded him the ability to acquire instruments, equipment and space to continue pursuing his passion for composing, recording and, eventually, producing music.

Despite an idyllic upbringing, it was when some of life's hardest challenges came along that Syversen found his personal path to the type of music he is dedicated to today. Following the painful end of a personal relationship, Syversen immersed himself in learning The Silva Method, and, in doing so, was exposed to music made specifically for relaxation and rejuvenation. His immersion in meditation not only expanded his spirituality, creativity and world view, it also inadvertently introduced him to the true power of music! Meditation and visualization practices enabled Syversen to begin trusting his inner visions, and he began to follow the innovative musical ideas and melodies that came through from a higher source.

Within a short time, his passions merged: the local meditation community began drawing on Syversens intuitive talent to improvise and record music for poetry readings, spoken meditations, and even for a local doctor specializing in chronic pain. As his musics popularity grew in the alternative and yoga community, he recorded his first CD, which readily accepted for released by Fonix Music in Denmark and packaged for release as Music for Relaxation. Thus began Tron Music.

Encouraged by this bit of success, Syversen poured himself into producing a series of pieces and organizing them into albums, then performing and selling CD's at fairs throughout Scandinavia, a process which he still enjoys today. Early success at the fairs was achieved with the help of his music soul mate, Elin Lokken, who eventually went far beyond her vocalist roots to become Syversens trusted producer on several albums. At one of Norways top body-mind-spirit fairs, renowned healer Runar Halonen was drawn to Syversens performance, and eventually invited him to collaborate on Your Healing Hour, which was first released as "Activation of Your Inner Healing Powers." Today, hundreds of holistic therapists all over Scandinavia have adopted Syversens romantic melody lines and slow tempo as the perfect background for spa treatments, massage therapy, meditation and visualization exercises; Tron Music plans to release an English language version of the meditation in 2012.

Syversen continues on his personal spiritual journey with every album, fearlessly following his intuition and composing in inspiring locations, from ancient abbeys to his seaside cottage by the sea. The music is manifested by him while in a meditative state, then expertly arranged, recorded, and produced in conjunction with a growing team of world-class singers, including Helene Edler Lorentzen, and live musicians at Tron Music. One can feel his passion for the sacred art of music present in each piece, the guidance of higher spirit, and a deep trust in the divine creative process. While the message and method evolves, Syversens greatest goal remains the same: to create inner peace within the listener.