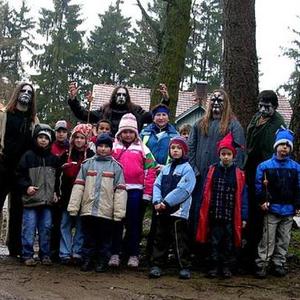 Trollech is Pagan Black Metal band from Plzen (Pilsen), Czech republic. Formed in 1999 . Next information is from Trollech homepage : www.trollech.com The Trollech Empire is ancient, but only in autumn 1999 Asura (Godwar Gorgon?s Ray) and Lord Morbivod have met each other, face to face and they felt desire to play for this Empire songs in the spirit of black metal. Asura was long ago thinking of chiming forest tones which would sound to celebrate nature. Songs are old, simple, but they are breathing with us.

The Trollech Empire is ancient, but only in autumn 1999 Asura (Godwar Gorgon?s Ray) and Lord Morbivod have met each other, face to face and they felt desire to play for this Empire songs in the spirit of black metal. Asura was long ago thinking of chiming forest tones which would sound to celebrate nature. Songs are old, simple, but they are breathing with us.

Welcome You who are coming to the gates of the empire called Trollech and take greetings from its guards. Before you enter, listen to the old story ...

Our empire extends in dark deep forests as well as in our hearts and minds. Only the oldest and wisest of us know the secret of both old age and our empire?s birth, as well as the one of the Trollech name?s creation, such age-old people we are. The Trollech empire is full of evergreen forests, beautiful meads and meadows, deep blue lakes, mighty roaring rivers, bubbling streams and streamlets, cold springs, lovely little wells and pools, high mountains and rocks with their peaks in snow and hills in fog.

Here live beings such as goblins, dwarfs, elves, nymphs, fairies, dryads, sylphs, dragons, witches and wizards, brave warriors, different nature elements, gnomes and plenty of other creatures, beasts and various nature vermin. The gates of Trollech were closed to the human world, because you, people, have forgotten both - the respect to Mother Nature and the beings which take care of her. You have lost the sense of perceiving beauty and grace of our kind Mother, you have forgotten her strong power which wakes up and sends to sleep every life. You have forgotten about her justice.

Now the time comes when the gates are open again, and we are coming into your world among you, the human race. We do not create the past, we create the future. We are coming to you from the far gates of our empire and in our hearts we are bearing a piece of our realm and a message, which we want to pass on you ... Listen to the song of Nature, as once your forefathers did. The voice is still in Your heart. We are just trying to wake it up ...

After we leave, only then stories and myths about the beings and guards of the Trollech empire will stay here ... Now welcome, enter and look through all you desire. We revealed a bit of the Trollech guards? secret ...
Asura G.G. Ray

So that the general knowledge about the Trollech Empire would not be transformed by any people, read the age-old truth and do not allow anyone to confuse you by venomous trends or antitrends which are poisoning our clean river of forest songs. We, the three old guardians from gates are one soul with nature and we worship old cultures which used to be in the old days closely connected with all the power and beings from plentiful forests. Yes, there really used to be times when also people understand to nature, they used to know her and only then she belonged to them as well. Now it is another age, although we do not avoid it, it does not come into our output in no way. We worship merits which pertain to present-day people very little, so it is impossible to talk about present soulless patriotism and not at all about nationalism and similar, for Trollech unknown, human inventions. Just at present misleading streams get into black metal society and hide under patriotic dictums something else than true love to the land. Many people talks about their pagan forebears, about pride and they connect with these words various pugnacious positions almost against all who do not spread the same. It is sad to watch how they abuse words, they do not know much about, to propaganda and to cover up their venomous political attitudes. Trollech is outraged when somebody, no matter how ranks, dare to dishonour pagan forest metal with feeble-minded words. Trollech is not interested neither in human nations nor their hatred and we will never allow them to enter our gates. We stand by each other and any miscreant does not change and damage our genuineness. For all that, for all the doubters we emphasize: "We are not, we were not and we will never be nationalist or differently political oriented band. We do not wish anyone would see in this something like that! We will always worship nature and our forest friends. They are the only one to understand us fully and mainly for them we will play true black metal songs."

Hail to forests and all the days of theirs!
Lord Morbivod
-x-
About the heraldic sign

The main symbols of the heraldic sign are the capital letters T in the centre, C and H by the sides (CH). These letters are the first and last letters of the name of the Trollech empire.

Three points of the heraldic sign symbolize the triplet - the principle of all being completion. The mother, father and child - a continuation of the line. The number 3 is also a number of Nature. It marks 3 kingdoms of Nature : animal - vegetable - mineral, 3 dimensions of space : the length - the width - the height, and 3 dimensions of time : the past - the present - the future.
Asura G.G. Ray