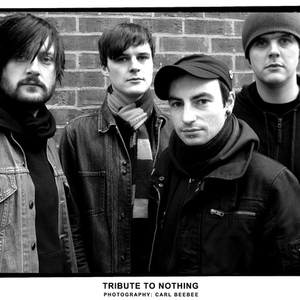 The Story of Tribute To Nothing began sometime in the mid ?80s. Inspired by everything that makes a sound, six year old, Ben Turner discovered his mum's household pots and pans and started begging his parents for a drum kit. Four long years later his desire was finally fulfilled. Shortly after, his two brothers Jim (Bass) and Sam (Guitar) followed his passion and proved to be highly talented kids at the early ages of 12 & 14.

As early as their second show the band played in front of a couple of hundred people, among them an EMI promotions manager. Even though they hadn't yet found their own sound the band's energy and passion for music secured them a support show with ?90s chart toppers Ned's Atomic Dustbin. Shortly afterwards the band found themselves in the Birmingham BBC studios recording their first real demo. The band then found themselves signing an album deal with go disc (a division of Polygram) whilst guitarist Sam was still only 13 years old.

After a very short period of time TTN developed into a true and honest post-hardcore band. This led to the band playing shows with amazing bands like The Fall, Shellac, Dee Dee Ramone, NOFX, Iggy Pop, Neurosis, Girls Against Boys, to name but a few. The success continued as magazines got interested in the band, title pages were offered, the band played TV shows and even the legendary John Peel invited them to record an hour long session for his show. To cut a long story short, as just teenagers, TTN experienced the hype of the music industry!

During the next few years TTN experienced a very different life to the average teenager. Collecting exemptions from their school became normality for their father Jack, who supported his kids so much that he left his day job to manage the band full time. This led to snatched moments of study in the back of a van as the band travelled up and down the country experiencing a side of life than most teenagers would ever dream of.

Local police stopped a show in Middlesbrough mid-performance, when singer Sam was still only 15 years old. The sound, which was being mixed by a former sound engineer of The Police, was too massive for the small venue. This was followed by a dozen policemen escorting the band and their equipment straight out of the town to ensure their safety against the club's angry neighbours who hoped the band would never return!

After only a handful of singles the band decided to leave the major industry behind, frustrated by the impersonal handling of the band and the continued emphasis on money before music. TTN then founded their own label lockjaw records to regain total control of their musical direction. And all this by the age of 18!

Their father Jack helped out with the business side of Lockjaw Rec's and the lads set about begging and borrowing money from grandparents and other family members to help the label take its first steps. Not wanting to set up a record label just to release TTN records, within a short period of time Lockjaw established itself as one of the UK's leading indie-labels, releasing Muse's first ever recorded song on CD.

The beginning of 2003 saw TTN's fourth studio album emerge. It was the first record supported by their brand new band member Kris Stammer, an old school-friend of the band. His unique approach and style of playing guitar complemented the bands complex post-hardcore sound perfectly. "Act Without Words" was also the first release in the bands history that gained European attention. The band found a new loyal following in Western and Central Europe. The year 2003 also marked the beginning of a mammoth European Tour which has led the band all over the continent and seen them play more than 250 shows in the past 2 years. There have been DIY shows in mouldy cellars, TV shows and support-tours for bands like Hot Water Music, No Use For A Name, Days in Grief, Boy Sets Fire.

Parallel to people taking notice of TTN through their exciting live show they have also picked up a formidable amount of fans through the media. "At The Drive In are the dirt under the feet of TTN", wrote a freelancer for the highly acclaimed Rolling Stone Magazine in 2004. He then goes on to describes what most concert-viewers all over Europe feel, "How come I did not discover this incredible live band earlier?"
TTN's impulsive live-show was also captured on the "A Brand New Cause To Fuel The Fire" DVD, which was produced by Ben Schnermann (Three Minute Poetry) and showcases the live-power of "one of Europe's best live bands" (Prinz Magazine, Germany).

On a human side, TTN start where their songs end. ?There is no separation here? the common moment of interaction with the audience, other musicians and their surroundings is what counts, no matter where & when. The deciding values are integrity, friendship and trust, which can be seen in the bands decision signing with Berlin based Destiny Records, instead of going back to better-endowed deals in major business.

A new TTN album "How Many Times Did We Live?" was released on 28.04.05 in Europe and 02.05.05 in the UK showcasing their most intense side ever. Now more than ever influences ranging from '80s DC post hardcore to '70s prog rock a la Pink Floyd up to modern day US-hardcore have found their way into the two year song writing process. "HMTDWL?" has not been artistically compromised and the band has achieved a true representation of their own unique brand of Post Hardcore. Demoing and recording of the album was 5 months in the making due to the high demands the band put upon themselves, in their own studio in England, to produce their perfect sound. The process of writing, re-writing and writing again was never compromised letting the band achieve their best album to date.

The songs reflect the band's experiences of the past years, a life torn apart on the road far away from home. Often the band found themselves trudging through the 23 hours a day of boredom, waiting for that one hour show which, let all the energy of the band break through! The other side of touring life finds the bands at home back in worcester. This other side inspires their songs equally, relations are often strained due to the gruelling tour schedules, mundane jobs (such as working as a builder's labourer) are worked due to the fact the band cannot support themselves financially with just the music. "Something I Can Trust" is the first single from the new album and reflects these two sides of life, always asking the question, ?Why the hell do I do this?? The answer is easy! ?Usual life is alien to us we just know how to play in a band. The constants in our life are the people at the shows, the family and the four of us, that is the life we trust and love because it is all that we know?.

Six months after their last tour the band is embarking again on another year of touring, to promote the new album. In March the whole European BSF-tour was the first of the year before the band hit the road again, playing constantly the following month. The lads will be doing what they do best ?playing live and trusting the life that they know!

Breathe How You Want To Breathe