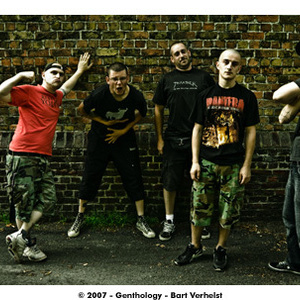 There has been more than one band called Trenchfoot. Based on my opinion, the only TRENCHFOOT that matters is the hardcore band from Rockland, New York. Listen to their first record (recorded by Kurt Ballou of Converge) at http://trenchfoot.bandcamp.com/ This one (featured in the photograph and detailed in the next paragraph) and the UK band from 1998-2001. The UK Trenchfoot was formed in Canterbury, Kent, UK by singer/guitarist/songwriter, Jay Capeling, and was made up of drummer...

This one (featured in the photograph and detailed in the next paragraph) and the UK band from 1998-2001. The UK Trenchfoot was formed in Canterbury, Kent, UK by singer/guitarist/songwriter, Jay Capeling, and was made up of drummer, John Rivers, guitarist, Tom Banbury, and Bassist, Les Williams, who left the band in 2000 due to personal differences. Williams was never permanently replaced and the band split in 2001 to pursue separate projects. The band produced two EPs: their eponymous first demo and The Human-Business Model EP. Their tracks, The Colour Of Hate (Lobotomize), and Li'l Bone Evil were released on LockJaw records' Helping You Back To Work Volumes 5 and 6.


---
The current band called Trenchfoot began with 2 members leaving Kingpin in the summer of 2004, Vez, Sim, Tim and Pedro chose to give the band a new name. The music was very different from what they were playing in the beginning (99). From NYHC the music evolved into cross-over Thrash metal kinda music, pushed by the amazing drum skills of the newbie, Tim. Wanting to play their favourite music, Bay area Thrashmetal/80's crossover, the band was looking for a good and motivated singer.

They played some shows with Stef (bloodshot) on vocals during 2005, but already separated ways with him in the spring of 2006 as wel as with Sim. During that period they recorded 6 songs with Xavier Carion ( ex ? channel zero / cyclone) behind the table.

In good speedmetal-tradition they completed the six songs in no more then 2 hours. Three of these songs were used some weeks ago to put vocals, from our new frontman Tom, on.
This demo is finally a fact. This completed line-up, containing (ex-)members of bands like Congress, Liar, Rise and Fall, Kingpin, Family of Dog, Cloon, Your God is dead, Mindstab, Distorted, Sledgehammer, Daisy Temple ..., is fully loaded to hit some stages again...

Bleeding For The Sake Of Bleeding