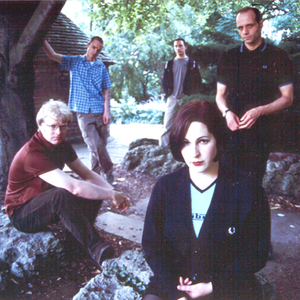 Trembling Blue Stars is a London based band led by former Northern Picture Library, The Yesterday Sky and The Field Mice frontman Bobby Wratten, considered by many the most brilliant and prolific songwriter in the recent history of British indie pop. Besides Wratten the current line-up includes Keris Howard, Beth Arzy and Jonathan Akerman, in many ways making the band an indie pop supergroup. The band was formed in 1995 and all the songs on the debut album, Her Handwriting (the title is a quote from Part Company by The Go-Betweens) were recorded in Mitcham...

The band was formed in 1995 and all the songs on the debut album, Her Handwriting (the title is a quote from Part Company by The Go-Betweens) were recorded in Mitcham, south London, in December '95/ January '96, with long-time The Field Mice/Northern Picture Library producer Ian Catt, also known for his work as producer/arranger/co-songwriter for Saint Etienne. Released on Shinkansen Records (the label launched by Matt from Sarah Records) the album, which intimately details the break-up of a relationship, received universally good reviews.

Subsequent albums, Lips That Taste of Tears (1998) and Broken by Whispers (2000), showed a band constantly improving their skills, combining their usual melancholy with transparent pop.

In 2001 the fourth album Alive To Every Smile appeared featuring a new line-up with many ex-Sarah Records band members in its ranks: Keris Howard from Brighter/Harper Lee, Beth Arzy from Aberdeen and Harvey Williams from Another Sunny Day/The Field Mice. Annemari Davies (ex-The Field Mice) also collaborated with the band. The album was very well received in Spain due to a release on Elefant Records (eventually TBS' main label) and in February 2002 the band visited Spain for the first time.

In 2003 A Certain Evening Light was released, a compilation of singles and B-sides.

In 2004 the band left Shinkansen; The Seven Autumn Flowers was released by Elefant Records worldwide.

In September 2005 Bobby Wratten announced that the band would no longer appear live. He had been uneasy about performing for some time, and had decided to concentrate on studio recordings instead. April 2007 saw the release of The Last Holy Writer.

2010 is expected to see the release of their new album, titled "Fast Trains And Telegraph Wires".

The Ghost of an Unkissed Kiss EP

Alive to Every Smile

Lips That Taste Of Tears (Reissued 2006)

Lips That Taste Of Tears