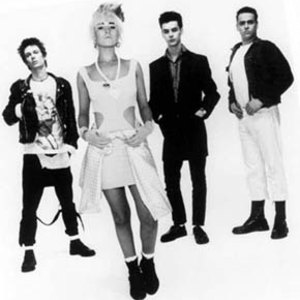 Transvision Vamp was a popular UK alternative rock group. Formed in 1986 by Nick Christian Sayer and Wendy James, the band enjoyed a brief period of success in the late 1980s, fusing elements of punk, pop and rock and the "big band" sound of Phil Spector to produce a pop punk sound. James, the lead singer and focal-point of the group, attracted media attention with her sexually-charged and rebellious image.

Together with Dave Parsons and Anthony Doughty (AKA Tex Axile) made up the the band's four permanent members. Additional members Pol Burton, James Piper and Martin Hallett were musicians engaged to play during live concerts: Burton, then later Hallett (AKA Mallet), on drums, and Piper on guitar.[2]
The band was signed by MCA and released a cover single of the Holly and the Italians song "Tell That Girl To Shut Up" in April 1988 . A month later the follow-up single "I Want Your Love", with its pop/punk crossover appeal, entered the Top 5 in the United Kingdom. The band went on to release the hit album Pop Art in October.
1989 was the band's most successful year, with the number 3 hit single "Baby I Don't Care" and hit album Velveteen.
In 1990 MCA refused to release Transvision Vamp's third album Little Magnets Versus The Bubble Of Babble in the UK, reportedly disliking the mellower direction of the music. Wendy James has stated "...it came out in America and did better than the other two albums in America. But then we decided to split up, during which time the English record label had said they weren't convinced about this record, we're going to hold off on it and see how well it does in other countries first. By the time they were ready to release it, we'd already decided to split up, and so it never came out". The band formally split early in 1991. Tex Axile left to Join Max with John Reynolds, Kevin Mooney and Mathew Ashman formerly of Sinead O'Connor, Adam and the Ants and Bow Wow Wow. Dave Parsons Joined Gavin Rossdale and formed Bush.
James went on to a solo career and in 2004 formed the band Racine.