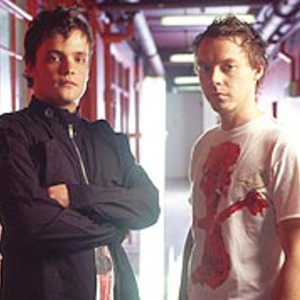 www.trafikmusic.co.uk DJ mixes available at: www.hybridized.org/sets/?artist=17 Trafik are putting the finishing touches to their second studio album, it will be entitled 'Dark Times'. This sees a return to the more eclectic feel of Bullet and according to the boys themselves is "easily our best work yet." ?Dark Times' will see Rachel Lamb guesting on vocals but, new to the fold will be Tricia Lee Kelshall, best known for her work on Way out West's 'Mindcircus' and In-Stereo, the twins currently providing backing vocals for Duffy on her world tour.

Trafik are putting the finishing touches to their second studio album, it will be entitled 'Dark Times'. This sees a return to the more eclectic feel of Bullet and according to the boys themselves is "easily our best work yet."

?Dark Times' will see Rachel Lamb guesting on vocals but, new to the fold will be Tricia Lee Kelshall, best known for her work on Way out West's 'Mindcircus' and In-Stereo, the twins currently providing backing vocals for Duffy on her world tour. There is also a pretty special collaboration with Morgan King to look out for too!

The only description being leaked concerning the album's content have been the words 'cinematic', 'aggressive' and 'epic' - hmmm... seems you'll have to wait a while before you know more. Expect robots.

Club Trafikana, released in 2007 was specifically created and produced to be taken on a worldwide club tour and was recently described in the dance music press as a "fresh take on the standard dance album concept" and "a great way to reinvigorate the fragmented nature of download culture". The unique live show utilises a mixture of decks, efx, synths mixing desks and controllers, and is followed by a rocking DJ set which work seamlessly together, leading to recent sell out gigs for 'Trafik Live' in Dubai, Singapore, Dublin and Spain.

Trafik's first album 'Bullet' released in 2004, successfully achieved cult status with a blend of genres and styles that was likened to Orbital and Hybrid. Their music has gained respect from the likes of Paul Oakenfold, Sasha, Nick Warren, The Plump DJs and Deep Dish. Their experience has been revered by Nick Warren, using productions from the duo on 3 of his 4 Global Underground albums. Added to that, the likes of Dave Seaman (Kylie Minogue's producer on 'Confide In Me'), UNKLE and Tilt have all commissioned monster Trafik remixes in recent years.

With music appearing on two of the world's most watched TV shows 'CSI: Miami' and 'CSI: NY' and on a selection of the latest Sony Playstation games, the sound of Trafik can undoubtedly be heard in all four corners of the world.

Trafik have also mixed some of the most seminal compilations in dance music history, collectively amassing well over 1 million sales in total to date. With 19 mix albums so far released, these include the new 'GUMIXED' and 'GUMIXED 2' albums, and the recently huge 'GU10' album quoted as "Possible the best album GU has ever released" by iDJ Magazine, and the 'Afterhours' Series (1-4) including 'Afterhours 2' which Pete Tong made his "Essential CD of the week". Added to this, Jive Magazine labelled Trafik's now renowned 'Electric Calm' series, as "the best chill out CDs ever", and the last 'Electric Calm V.3' was an instant hit on iTunes reaching #1 in Canada, #2 in the UK and #3 in the US download charts.

Trafik are Andrew Archer and John Elliott. Andrew found fame as one part of the Forth achieving huge notoriety re-mixing the top 40 hit BT - 'Loving You More'. Andrew, with the aid of DJ partner Scott Dawson then developed the Forth as an all conquering DJ outfit that would see them travel to the four corners of the globe. One memorable moment was Andrew's DJ show on the Great Wall of China, which was the first live performance there by a western DJ in China; contrary to a claim made by a certain Mr Oakenfold. Then came the release of the Forth's debut EP 'Reality Detached', described by DJ Hyper as his favourite track of all time. Also featuring on this EP was a destructive club track 'Solavox' which featured vocals from a certain John Elliott.

Previous to this first meeting of the minds for the Trafik boys, John had been living the life of a rock band member, and since leaving school at the tender age of 16 he toured with the widely loved British indie band Solavox. John experienced the highs and lows of the music industry ranging from being the youngest songwriter on Polygram's books in a ?250,000 deal, to the cold and lonely road home after rock and roll excess were laid waste by other members of the band that at the time had been labelled by Melody Maker "even better than the real U2". With no regrets though, time on the road gave John an education in the world of live music, where he learnt to not only sing live but play guitar both axe and bass, keyboards and 'a bit of drums!'; raw and crucial experience that cannot be taught anywhere else.

Trafik's unique sound was thus created, combining the DJing and programming skills of Andrew and the live ability and production skills of John. With plans in the making for a new third album, more licenses and remixes, alongside sync music for TV shows, advertisements, film and computer game soundtracks, and more 'Trafik Live' world tour dates coming up, expect to hear much more from the duo...

For any other information on Trafik please contact: jane@loftmusic.co.uk