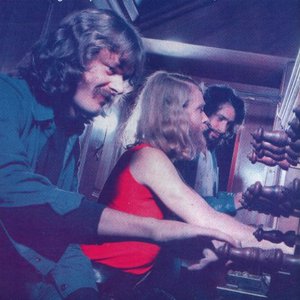 There are at least 4 bands / artists called Trace. One were a 1970s progressive rock band from Holland, another a pop group from Germany. The third is a drum and bass producer / DJ. And the fourth is a un-signed alternative/electric band in the area of huddersfield 1) Rick van der Linden's father was a pianist, so it was not a surprise that young Rick took piano-lessons. Later he started to learn playing the organ and finally he went to the Haarlem Conservatory. He played in many bands and nightclubs and was impressed by Brian AUGER and Keith EMERSON.

1) Rick van der Linden's father was a pianist, so it was not a surprise that young Rick took piano-lessons. Later he started to learn playing the organ and finally he went to the Haarlem Conservatory. He played in many bands and nightclubs and was impressed by Brian AUGER and Keith EMERSON. Rick got worldwide recognition with the 'classic-rock formula' from Ekseption but he wanted his own band to show his keyboard pyrotechnics. He founded TRACE with bass player Jaap van Eik (CUBY AND THE BLIZZARDS, The MOTIONS, SOLUTION, LIVING BLUES) and drummer Pierre van der Linden (TEE SET, Brainbox, Focus), a real Dutch supergroup! Now he got the opportunity to work out his own ideas with keyboard-dominated symphonic rock. In '74 TRACE released their eponymous debut-album, in '75 their second entitled "Birds" (Ian Mosley had replaced Pierre van der Linden) and in '76 their third and final "Ladies". TRACE is a kind of Dutch equivalent to early ELP but Rick has a wider array of keyboards, including Hammond B3 organ, Hohner clavinet and pianet, ARP - and EMI synthesizers, harpsichord, Solina string-ensemble, Mellotron and church organ. He even used the sound of a bagpipe! The music is a treat for fans from bands like The Nice, Emerson, Lake & Palmer, Triumvirat and early Le Orme. Despite good albums, great concerts and worldwide recognition, Trace didn't work out the high expectations and the 'supertrio' dissolved in the late Seventies. Nowadays Jaap van Eik is chief-editor from the technical based music magazine Music Maker and Rick recently after many years again went on tour with a new EKSEPTION line-up, including a magnificent digital church organ and his wife on vocals. Rick died 22 January 2006 after suffering a stroke.

The first two albums "Trace" and "Birds" (released on CD with bonustracks by Musea Records) deliver exciting, often sumptuous, keyboard driven symphonic rock: the mainly instrumental music is loaded with virtuosic keyboard runs, swirling Hammond organ and majestic Mellotron eruptions from wizard Rick van der Linden, supported by a powerful and propulsive rhythm-section. In my opinion the tracks on "Birds" sound more elaborate and refined. The epic composition "King-bird" (featuring Jaap van Eik on electric guitar) showcases the hugh potential of TRACE: dazzling keyboard runs, many changes of climate and dynamic interplay. The third album "Ladies" is a lacklustre effort, the band was running out of ideas. This record turned out to be their swansong.
--
www.progarchives.com

2) The record of this epic N?rnberg rock band starts with a sound of wind. Adequate. As old as nature metaphors are, Trace raise a tornado of melody, emotion and energy on their second longplayer. Rousing songs that will quickly get you in their band and going straight to your eardrum with its beautiful eruptions.

Fact is: a pop-storm like that does not build up with half-hearted blowing. Therefore Trace run through the music scene since 2000, always driven by passion and the urge for development. The acuteness of Muse meets the desperation of Jeff Buckley and the determination of Coldplay.

"Magnolia" is the 2nd LP, produced by Trace and their drummer Ric Simon, which was recorded by themselves. Not later than the chorus of the opener "Scenario" it is clear that Trace are not any rehearsal room amateurs. Recording the record themselves is a sign of perfectionism and self-initiative. Trace like to have control over their output. DIY attitude and cinemascope melodies don't have to be antagonism. And when the result sounds as compact and dynamic as Trace do - it's much better. Or as Z?ndfunk (Bayern2Radio) recently assumed: "Guitars and surface that seem to fall out of your speakers and a voice that could reach the rock charts. Trace heading towards to the wide music-cinema."

The magnolia as the official title flower shows how to do it. The older the plant gets the more beautiful their blooms get. That covers Trace very good as their melodic buds bloom more and more after listening to the record over and over again. What stays is a beautiful, meditative and enthralling record that sprouts with confidence but still knows: we all have to fade. All that's left is music.