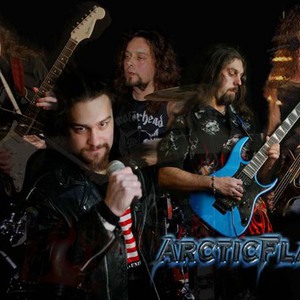 After the release of ArcticFlames first album, ?Primal Aggressor? the band knew what direction to go in for their next CD. Though the band appreciated the production finesse of producer Jack Frost, the group wanted to head into a more straight ahead metal sound. It is no secret that the band follows in the footsteps of the classic metal bands but on the following disc, they wanted a ?dirtier? guitar sound. ?We were looking for a more ballsey, cruncher guitar sound than the first album?, explains guitarist, Rod Mariani. ?Bigger, massive, destructive...yeah, that's what we were after!?

?We were looking for a more ballsey, cruncher guitar sound than the first album?, explains guitarist, Rod Mariani. ?Bigger, massive, destructive...yeah, that's what we were after!?

Songs such as ?Lord of the Wasteland?, ?Desert Moon? and ?The Unknown God? capture the essence of this train of thought. ?Hammer Down? further solidifies the bands effort on this album. Along with the exploration of guitar sounds the band also wanted to experiment with different vocal layers. ?Blind Leads the Blind? adds multiple vocal lines with orchestration to fully tell the story plot. Not to abandon some of the Celtic melodies that were heard on the first CD, the title song ?Declaration? keeps this tradition alive.

More aggressive guitar driven songs mixed with melodic and textured vocals are dramatized further by a tight and thunderous bass and drum mix on this album. The band has always tried to mix in some of the aggressive metal of American bands with the musical intelligence of the European bands. ?Declaration? is the first step toward this direction.

Dark graphic artist, Juanjo Castellano provides his unique imagery to the CD. Based on a concept by drummer Mike Paradine, the bands mascot, Mortypian Orbis or Morty the Orb for short, once again finds himself in a battle of survival.

Guardian At The Gate