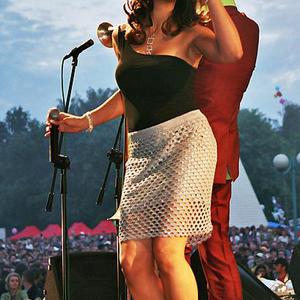 Touch And Go is the progeny of an unholy alliance between television composer David Lowe, veteran radio presenter and music journalist Charlie Gillett and co-founder of Oval Music, Gordon Nelki. Charlie and Gordon have wide-ranging tastes in popular music and a fondness for something just that bit different. Paul Hardcastle's 19 was one of their earlier successes. Having worked together on the Dreamcatcher project, the trio conceived a new concept based around largely instrumental jazz-based tunes with an ?economical' use of lyrics ? quite unconventional by today's chart standards.

Charlie and Gordon have wide-ranging tastes in popular music and a fondness for something just that bit different. Paul Hardcastle's 19 was one of their earlier successes. Having worked together on the Dreamcatcher project, the trio conceived a new concept based around largely instrumental jazz-based tunes with an ?economical' use of lyrics ? quite unconventional by today's chart standards.

Influences for the project ranged from The Champs' Tequila and Mongo Santamaria's Watermelon Man to Louis Armstrong's Dippermouth Blues. Within a few days, Dave had put together Would You?? using a sampled vocal clip and trumpet jazz licks played by James Lynch, over a Latin rhythm.

Released in October 1998, Would You?? reached number 3 in the UK charts, remained in the top ten for a month and subsequently became a hit all over Europe and many other parts of the world. The single sold half a million copies worldwide, and was included on literally hundreds of compilations whose total sales exceed ten million copies.

Touch And Go's album, I Find You Very Attractive followed up the success of Would You?? and included three more singles Straight To Number One, So Hot, and Tango In Harlem, all of which are widely played on radio throughout Europe, especially in Eastern Europe where Touch and Go is one of the UK's best-known acts.

About The Performers
Vanessa Lancaster, Vocalist
Vanessa Lancaster began ballet classes at the age of 4, gaining success in exams at the Royal Academy of Ballet in London. Shortly afterwards she began drama lessons in her free time and auditioned successfully for the Corona Stage School in London where she was educated until the age of 16. Vanessa completed her education at the Lucy Clayton Finishing School in London which was followed by 8 months working in the USA.

In London, Vanessa has worked as a voice-over artist for numerous UK TV commercials and has modelled both on the catwalk and for beauty products. Her other television credits include Emu's World for ITV and the James Bond movie Octopussy.

Vanessa began singing professionally at the age of 15 when she teamed up with brother Shaz to form a band called Boys Behaving Badly whose drummer later became a member of Jamiroquai. Vanessa was, of course, the only girl member of the group! Once her vocal talents were discovered, Vanessa became a much in-demand singer on the London recording session scene, which led to a world tour with Urban Species.

Having sung on numerous jingles for producer and songwriter David Lowe, Vanessa was invited to collaborate on a new project Dave was working on which became Touch And Go, whose records have now become hits all over the world. Vanessa co-wrote the Touch And Go songs Straight To Number One, Big Beat and So Hot.

James Lynch, , Trumpet
London-based trumpeter James Lynch was educated at the City Of Leeds College of Music where he gained a first-class degree in Jazz & Contemporary Music and won prizes for Outstanding Performance, Brass and Arranging. As a former member of the National Youth Brass Band of Great Britain, Jim won the Newman Cup at the age of 17 for Most Improved Player.

On moving to London he joined the National Youth Jazz Orchestra of Great Britain eventually becoming their lead trumpet player. Jim began his professional career with society dance bands in London's Mayfair district before moving into the freelance areas of work such as musical theatre and recording. He has played in many of London's West End musicals including Chicago, Starlight Express, Jesus Christ Superstar, Saturday Night Fever, and My Fair Lady.

In the world of pop music Jim has played in the big bands of Robbie Williams and for Babybird, Embrace, The Freestylers, Beverly Knight and also Missy Elliot. He has also played for Shirley Bassey and Michael Ball. Jim was brass arranger and first trumpet for the Spice Girls on their last UK tour, which was broadcast live on Sky TV from London's Earls Court Arena. Recent clients include the Matthew Herbert Big Band, London rapper Dizzy Rascal, Engelbert Humperdink and opera singer Lesley Garrett.

Jim has played on many TV shows in the UK and abroad and his trumpet can be heard on many theme tunes and TV commercials too. Recently he played on the soundtrack and wrote four arrangements for the Kevin Spacey film Beyond The Sea. He has worked with composer and producer David Lowe for a number of years and can still be heard on the theme for BBC's Cash In The Attic. He was invited by Dave to collaborate on a new project, which eventually became Touch And Go. James co-wrote the Touch And Go songs Would You??, So Hot and Life's A Beach.

Straight To Number One (The Best Of)

I Find You Very Attractive