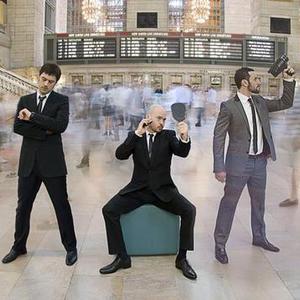 Rose and violet lights fall on three musicians decked out sleekly in skinny ties, pressed slacks, and starched white shirts. The mass of bodies gathered before them pulsates with a unified enthusiasm. Sweet soulful vocals rise from the man in the middle, an effect rendered all the more captivating by the fact that he is concurrently beating out an unrelenting backbeat on the drums. Flanking him on either side are a bassist who jumps up and down to the rhythm as he generates the throbbing low-end, and a keyboardist whose cool composure belies the fire in his fingers.

Born of the simple yet adventurous belief that modern dance music can be performed completely live, Brooklyn's Tortured Soul packs dance floors with their unique live performances, while their recorded oeuvre pushes the genre boundaries of soul, dance, and pop.

Tortured Soul has blazed an amazingly uncommon trail through the world of modern music. Following early success with singles - ?I Might Do Something Wrong?, "Fall In Love" (2002, Central Park - feat Vince Williams aka DJ Spinna) & ?How's Your Life? (2002) - Tortured Soul formed officially as a live band and booked their first nationwide tour in 2003, often playing in club settings that had never before seen a live act perform dance music so seamlessly. With the devotion of club-goers and DJs cemented as their foundation, TS branched out to live venues and festivals worldwide, from Tennessee's Bonnaroo, to the UK's Big Chill, to the Java Jazz Festival in Indonesia. Today, after 5 years of touring and a reputation for a live show nothing short of legendary, they are perhaps the only band in the world that can rock the main room at Fabric (London) at peak hour, as well as a 15,000+ festival crowd at the Montreal International Jazz Festival.

Combining elements of old soul and funk with a modern dancefloor sensibility, Tortured Soul's style is both an echo of the past and a challenge to the future. This blend of sounds has won them praise from palettes as diverse as Lenny Kravitz and Barry Manilow, and made them a fave pick of DJ's across many genres. Their tracks have received remix treatment from such luminaries as Osunlade, DJ Spinna, Alix Alvarez, Quentin Harris and Dimitri from Paris among others, and have appeared on over 25 compilations by the most prominent dance labels, from Hed Kandi to Defected - a testament to the impact they've had on current dance music.

2006 saw the release of their highly lauded first full-length album ?Introducing Tortured Soul,? (Purpose Records / R2 Records) which collected their early 12? singles with some new studio gems, and fans around the world have been waiting with baited breath for the sophomore effort ever since. In early 2009 the wait will be over, as Tortured Soul drops their new album ?Did You Miss Me? on the band's own newly formed TSTC Records (Dome UK/Europe, Columbia Japan). Previewed for fans with the 3-song/1-remix ?In Transit EP? in Spring '08, ?Did You Miss Me? picks right up where ?Introducing? left off. As it winds its way through infectious disco grooves, heartfelt raw soul, and lyrical themes that range from melancholic love, infidelity, and party-going mirth, the album coheres as the group's most accessibly diverse effort to date.

With the launch of TSTC Records, the new album ?Did You Miss Me? forthcoming, and worldwide touring to follow, 2009 is sure to be a huge year for Tortured Soul. Standing on the vast musical foundation that they themselves have laid, Tortured Soul looks eagerly to the future -- and in the words of Gilles Peterson, ?the future of house music? is Tortured Soul.

Did You Miss Me

Kiss Of The Thorn