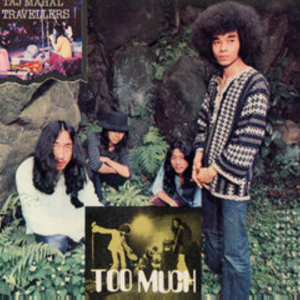 Too Much can refer to at least 3 artists.: 1) A Japanese blues rock/psychedelic rock band 2) A Belgian punk duo who released the single "Silex Pistols b/w Photo, Photo". 3) A rapper Biographies listed below: 1) Too Much formed in the large city port of Kobe in 1970, where the band members grew up sucking in all kinds of western influences from the LPs and 7? singles that came in on the boats.

1) Too Much formed in the large city port of Kobe in 1970, where the band members grew up sucking in all kinds of western influences from the LPs and 7? singles that came in on the boats. One member of the band, guitarist Junio Nakahara (who had changed his name to Tstomu Ogawa prior to being part of Too Much), had spent the late ?60s in the blues group The Helpful Soul. They released 'Too Much' in 1972 and broke up soon after the album's release.

2) Too Much was a Female punk duo from Belgium who released one single called "Silex Pistols b/w Photo, Photo" on EMI in 1978 . Both songs were written by Yvan Lacomblez who also penned Plastic Bertrand's ""?a plane pour moi".

For my 7th birthday my Mom bought me Snoop Dogs CD "Doggy style" (UN-edited)
I wore that disc out! It wasn't long before I recorded it on tape and wrote every song down verbatim. By the next year I was re-mixin' every song on the album and performing them at show and tell. By 5th Grade I was listening to Bone Thugs, Dr. Dre, Celly Cell, Loony Coliogne, OutKast, and Too Short. I performed an anti-drug song that I wrote for D.A.R.E. graduation that year. After I saw the audience bobbin their heads and feelin' my shit, I knew then and there that I was gonna be a rapper for the rest of my life.

6th Grade I got put on the set. My big homies jumped me in to E.G.C. (East Side Gangsta Crips). I was the only white boy bangin' the set so I had somethin' to prove. By the time I was 12-13 I was posted on the corner slanging crack with a .22 on my hip and a chip on my shoulder. It wasn't long before I was locked up in juvy, but soon as I hit the streets I was back on the same shit. In and out. In and out. My momma couldn't handle me any more so she sent me to Missouri to live wit my Dad. After getting re acquainted we became best friends. For the next year or 2 I bounced back and forth between Tacoma WA and Nixa MO. Talk about a culture shock. I caught a dope case at 16 and got put on probation in Christian County so I bounced out to the west coast and got right back on the same track I left out on (slangin' and bangin', rappin' and trappin'). I was doin' armed home invasions, jackin' cats n broad daylight, and the types of drugs I sold kept getting harder and more plentiful. Before I knew it I was ridin' a stolen whip and totin' stolen pistol. It wasn't long before I got arrested for possession of a controlled substance again and thrown back in juvy. I had warrants in MO so after I did my time for the crime WA held me for an additional 6 months until I turned 17. That's when I was extradited from a juvenile facility in Tacoma WA to Christian County jail in Ozark Mo. My 3rd day there a guy who had been sittin' in County for 4 years on a murder trial tried to stab me in the neck with a ink pen over a game of spades. I blocked the shank and beat the sleeves off him. I didn't file any charges on him and was released on probation.

I violated my stipulations one too many times and my probation was revoked at 19. That's when I did my first bit in D.O.C. bout a year and a half. I got out and was sent back within 7 months with a new case pending. Because I had pending chargers it upped my custody level and they put me in a level 4-5, prison with cats that ain't never goin' home and ain't got shit to lose. Of course I gotta get in where I fit in so I was cliken' up wit all my Crips on the yard. Once again the only white boi gang bangin', but this time in a level 4-5 prison. The white dudes hated me worse than they did the black folks. But I kept it real, threw my hands, and held it down so my respect was earned. I wrote boat loads of flows while incarcerated. I would battle anybody on the yard that thought they could rap In Bowling Green D.O.C. I was the rap specialist and everybody knew it. I made sure of that. I got out after another year and a half walked my parole papers and was a free man. Shortly after that my Dad (my best friend and role model) was arrested for possession of automatic weapons, plastic explosives, and a MK55 ground to air missile He was charged as a terrorist and sentenced to 25 plus 5 in the Feds. He currently resides in Marion IL Federal D.O.C. I will never get to see him again. He will die in there.

Sometime in early 08' the state charged me with the "possession wit intent to deliver" case I caught while out on parole for seven months in 05'. I bailed out and got a lawyer. Since then, I was doin' shows in Springfield any where I could get 'em. I have opened up for many groups. The ones I talk about most are Murphy Lee, and Bizzy Bone from Bone Thugs and harmony.