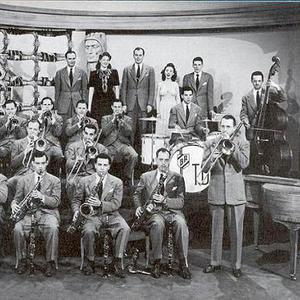 Tommy Dorsey (November 19, 1905 ? November 26, 1956) was an American jazz trombonist, trumpeter, and bandleader of the Big Band era. He was the younger brother of Jimmy Dorsey. His lyrical trombone style became one of the signature sounds of his band and of the Swing Era. Thomas Francis Dorsey, Jr. was born in Shenandoah, Pennsylvania, and started out only 16 years later in Allentown, Pennsylvania, with big band leader Russ Morgan in the famous pick-up band of the 1920s "The Scranton Sirens".

Thomas Francis Dorsey, Jr. was born in Shenandoah, Pennsylvania, and started out only 16 years later in Allentown, Pennsylvania, with big band leader Russ Morgan in the famous pick-up band of the 1920s "The Scranton Sirens".

Tommy and his brother Jimmy worked in several bands, including those of Rudy Vallee, Vincent Lopez, and especially Paul Whiteman, before forming the original Dorsey Brothers Orchestra in 1934. Ongoing acrimony between the brothers, however, led to Tommy Dorsey's walking out to form his own band in 1935, just as the Orchestra was having a hit with "Every Little Moment."

Tommy Dorsey's first band formed out of the remnant of the Joe Haymes band, and his smooth, lyrical trombone style ? whether on ballads or on no-holds-barred swingers ? became one of the signature sounds of both his band and the Swing Era. The new band hit from almost the moment it signed with RCA Victor with "On Treasure Island", the first of four hits for the new band that year. That led to a run of 137 Billboard chart hits, including his theme song, "I'm Getting Sentimental Over You" (which showcases his phenomenal range and masterful mute use, reaching up to the high C #), "Marie", "The Big Apple", "Music, Maestro, Please", "I'll Never Smile Again", "This Love of Mine", "On the Sunny Side of the Street", "T.D.'s Boogie Woogie", "Well, Git 'It", "Opus One", "Manhattan Serenade", and "There Are Such Things" ? among many others.

Dorsey might have broken up his own band permanently following World War II, as many big bands did due to the shift in music economics following the war, and he did disband the orchestra at the end of 1946. But a top-ten selling album (All-Time Hits) made it possible for Dorsey to re-organise a big band in early 1947.

The biographical film of 1947, "The Fabulous Dorseys" describes sketchy details of how the brothers got their start from-the-bottom-up into the jazz era of one-nighters, the early days of radio in its infancy stages, and the onward march when both brothers ended up with Paul Whiteman before 1935 when The Dorsey Brothers' Orchestra split into two.

The Dorsey brothers themselves later reconciled ? Jimmy Dorsey had had to break up his own highly successful big band in 1953, and brother Tommy invited him to join up as a feature attraction ? but before long Tommy renamed the band the Dorsey Brothers Orchestra. On December 26, 1953, the brothers appeared with their orchestra on Jackie Gleason's CBS television show, which was preserved on kinescope and later released on home video by Gleason. The brothers took the unit on tour and onto their own television show, Stage Show, from 1954 to 1956, on which they introduced Elvis Presley to national television audiences, among others.