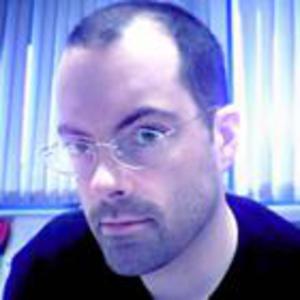 Tim Wright, aka Tube Jerk, Sand, Germ ,etc, shares a name with another Tim Wright: alias CoLD SToRAGE, a British musician most famous for his work in video game soundtracks such as Wipeout. Tim is capable of turning his hand to just about anything. From techno, electro, garage, hip hop, punk and beyond this York based multi-genre-ist fuses sounds and styles like a musical magpie with a taste for circuit boards and gold-plated plugs.

Tim is capable of turning his hand to just about anything. From techno, electro, garage, hip hop, punk and beyond this York based multi-genre-ist fuses sounds and styles like a musical magpie with a taste for circuit boards and gold-plated plugs.

His ascent from bedroom enthusiast to acclaimed artist was, as you'd probably expect, far from conventional. An early musical tutoring courtesy of his parents classic pop collection (Pet Sounds, Dark Side of the Moon, Tubular Bells) soon gave way to a far more exploratory sense of adventure as Wright began unearthing gems from the outer reaches of the musical stratosphere. By his teenage years the likes of Captain Beefheart, The Fall, Psychic TV and Test Department ruled in his musical world. Enhanced by his classical leanings it was always safe to assume that he would tend towards the extreme.

By the time he moved to Manchester in 1988 the confrontational and overtly political howl of the anarcho Crass / Conflict axis and the genre busting fusion of dub rhythms and punk attitude of the On-U-Sound Collective (Tackhead / African Headcharge / Bim Sherman) had begun to make an impact. Concurrently the explosion of dance music in Manchester and Wright's frequent visits to local illegal parties saw him begin the process of moving from the fringes towards a point where he would start recording tracks of his own inspired by his rich and varied musical past.

A move to York in 1992 proved to be the catalyst Wright needed. At the same time he became acquainted with a brood of liked minded individuals, united by their patronage of local record emporium Depth Charge, who were setting up a small studio in York, Finsbury Park Studios, geared towards the production of electronic music.

By 1993 his rudimentary tracks resulted in a release under his Germ alias for local label, Resource and soon Wright was brought to the attention of the blooming GPR imprint. Germ have been described as "one of the most influential, under-recognized forces of innovation in the European experimental electronic music scene" (All Music Guide) - pioneering experimental electronica years ahead of the competition. Wright would go on to record a number of EPs and a brace of albums under the Germ alias for GPR but by the mid 90's they had hit the rocks and it wasn't until the formation of Sand that Wright began recording again.

Formed with Hilary (who had played trombone on some Germ tracks) Sand's manifesto is to weld the sound of organic and electronic instruments in a credible and unique way. Signing to Soul Jazz Records, they have released a number of singles and three albums to enviable praise. The third Sand album, The Dalston Shroud was be released in the autumn of 2006 on Soul Jazz Records. This project runs concurrently with his more dancefloor solo ventures, which includes his Tube Jerk releases, spawning several 12?s and albums for the PIAS label ILL and Sativae respectively.

Coming to the attention of novamute through a reworking of Cristian Vogel's Whipaspank, it wasn't long before the London based label offered Wright the opportunity to explore the musical directions in which he was heading. Dropping the aliases, preferring to trade under his own name, Wright released a brace of singles for novamute in 2002 - 2003. Searcher and Going Down proved to be radical marriages between the majestic sweep of classic techno and the anglicised beats of UK garage. The combination of the two sounds worked, with Searcher rapidly becoming a success with techno and garage heads alike. By the start of 2003 Wright had bolted himself into the Finsbury Park studios in York to begin work on what would become his debut album for the label, Thirst.

Starting recording in January 2003, the album was eventually completed in October of the same year and released April 2004 with vocal contributions from Juice Aleem (Thirst) and Toastie Tailor (The Ride) who had previously worked with Wright on their New Flesh project. Tracks on the album feature Tim's trademark sound from electro-techno (Kick The Door In, Shine) and punk 4/4 filth (Oxygen, Control Freak) to a full-on experiment in drum n' bass (Killergod). The 11 tracks expand upon the theme explored on his brace of singles for novamute, combining apparently polar styles and genres with startling effect. Inspired in equal parts by electro, techno, jazz, ragga and the bounce of UK garage, Thirst is a unique proposition. Varied and original, Thirst is a perfect summation of Wright's rich and diverse sound.

Looking to the future, Berlin based techno label Tresor will be releasing Tim's next single in June 2007. "Definitely Wrong" features a vocal from Toastie Tailor rescued from the never-released full version of Kick The Door In. Flipside "Spindle" recalls the lush dark atmosphere of Tim's Germ days, with a sparse but irresistible groove.

Beyond Your Back Door