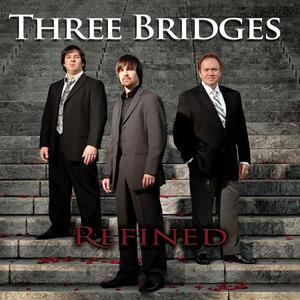 Three Bridges' music is rooted in traditional ?southern gospel? and ?black gospel? music. This blended style has made Three Bridges is an internationally-acclaimed Gospel group ? one that is known for tight harmonies, a unique vocal style, an exciting and energy packed stage presence and, most importantly, for spreading the joy of the Good News of Christ. They have entertained and ministered to millions through their recordings, TV appearances and live shows ? which is why Three Bridges has quickly become one of the most prominent Gospel groups in Christian music today.

Following the release of the critically-acclaimed debut album, Soldiers (2002), Three Bridges has wowed ?packed-out? venues across the nation?from Gospel singings, business conventions, churches, political meetings, TV shows, charitable relief events ? all the way to Air Force One! They have also appeared on five Bill Gaither video tapings and were special guests on a video for the United Nation.

12 of their radio singles have been in the top 40 on the Southern Gospel Music Charts, including seven top 10?s and three #1?s. The trio consists of Elliott McCoy (founder//manager//baritone), Shannon Smith (lead) and Jeremie Hudson (tenor). Although from varied backgrounds and hailing from different parts of the country, God brought these three men together for His purpose and Glory. They minister wherever God calls them to spread His Word through music.