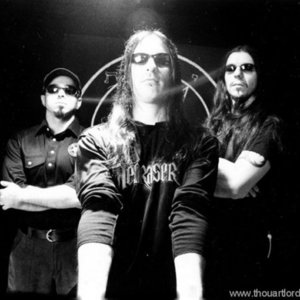 It was 10 years ago that The Magus (Necromantia) and Sakis (Rotting Christ) decided to form a project band under the name THOU ART LORD. The reason was plain and simple: to play fast, loud , extreme sinister music without restrictions and limitations. The whole image and attitude of the band was undoubtedly Satanic in nature, with violent overtones and an inherited rebellion against the ethics and lifestyle of all major religions, including a devious occult connection. Adding Gothmog (Terra Tenebrae, Mortify) as a vocalist the band became a hellfire trio!

Their first release was the 7'ep "Diabolou archaes legeones" (aka The Devil's ancient legions) shortly followed by a split 7' ep with the Belgian black metal band Ancient Rites in 1993. The eps were received with great enthusiasm from the underground black/death metal scene and they sold around 8000 copies altogether! In 1994 the debut album entitled "Eosforos" was released by UNISOUND RECORDS. The band proved once more their devotion to the extreme music with a totally destroying album! One year later the second and more complete album entitled "Apollyon" , once again released by UNISOUND RECORDS, was a testimony of diabolic fury and bursting violence. Much better sound, much better music! The receptance from the fans was once again huge but due to the obligations with their other bands and musical projects, the main members decided to freeze the band holding a future resurrection as a possibility.

It was 7 years later that The Magus and Sakis decided to bring THOU ART LORD back to life!! Kind of tired of the hypocrisy and "technical perfection" of the current black/death scene it was the right time to play "no holds barred" extreme metal! This time Spiros (Septic Flesh) joined their ranks as the main vocalist and Akis K. (Naer Mataron, Septic Flesh, Order Of The Ebon Hand e.t.c.) as the perfect drummer. "DV8" the title of the much anticipated album from the die-hard fans around the world! The album is a unique mixture of fast modern death metal, primitive black metal, haunting melodies, twisted harmonies and even slight new-metal touches. All the explosive elements of today's hard/extreme music, packed into one big bomb ready to explode in your ears! The concept of the lyrics remains purely Satanic in nature with emphasis on sexual liberation, initiation into Higher Mysteries and the quality of Satan through the centuries.