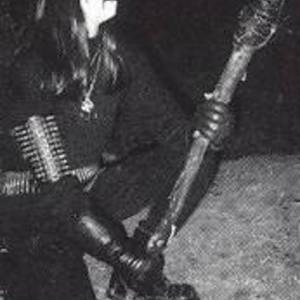 Thornium was founded by Thyph (a.k.a Thypheuz) in 1993. Thyph entered the studio the same year to record Thornium?s first and only demo ?North Storms Of The Bestial Goat Sign?. It contain three songs: ?In The Depths Of Northern Darkness?, ?North Storms Of The Bestial Goat Sign? and ?Min Vandring Till M?rkrets Furste?. All instruments was recorded by Thyph himself starting with the drums, then the guitars on top and lastly bass guitar and vocals. With Thyph having an extensive net of contacts in the Black Metal underground at that time the demo was very well received all over.

The demo resulted in a deal for a full length CD with a small Dutch label (r.i.p) named Necromantic Gallery Productions, which have released productions of bands like Gehenna, Dimmu Borgir, Ulver. It was at this time Ulverheim joined Thornium on lead guitar.

During the dark winter months of November and December in 1994 Thornium entered the studio once more to record the debut album ?Dominions Of The Eclipse?. This time the line-up consisted of Thyph on drums, bass guitar, guitar, throat and Ulverheim on lead guitar and acoustic guitars. Originally the album title was meant to be ?Carpathian Night Shadows?, but that title was soon changed. Since the band were unhappy with the eighth track, ?Slottet I Skuggornas M?rker?, they wanted to exclude it from the album completely. But after some persuasion from the label (NGP) it was finally added to form the complete debut album of Thornium, which was released by NGP in 1995. A CD containing eight songs of dark, grim and chilling Black Metal and one last gloomy song made with synthesizers. Even though the budget was very small Thornium managed to produce a cold and raw album capturing the very essence of Black Metal! Sadly, until present day this is the only album released by Thornium.

Though Thornium never really split up, there have been nothing but silence from the band for ages. With Thyph being in prison for many years things naturally got complicated.

In June 2008 Thornium signed a 3 album deal with the Dutch label Soulseller Records and the next album is expected to be released in the beginning of 2009. The title is "Mushroom Clouds And Dusk". Meanwhile the debut album, including the three demo tracks, was released as a double LP in a limited edition by the German label Kneel Before The Master?s Throne.

Dominions Of The Eclipse