The World Of Oz 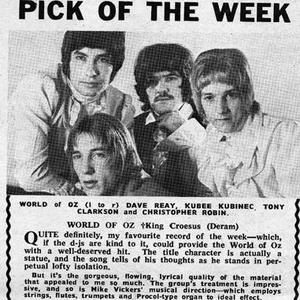 The World of Oz were formed in Birmingham, England in January 1968 and the members were Christopher Robin (vocals / guitar), Tony Clarkson (bass), David Kubinec aka 'Kubie' (guitar / organ) who was replaced by Geoff Nicholls and David Reay (drums) who was replaced by rob moore. Not much is known about the World of Oz, we all know that the group were signed up to Deram, recorded three singles and an album and appeared on TV shows 'Beat Club' and 'Colour Me Pop'. "The Muffin Man", and "King Croesus" and "Willow's Harp" were hits in Holland.

The World of Oz single sides "Muffin Man" and, better still, "Like A Tear", reflect a tuneful trippy sensibility and have been anthologized on various psychedelic collections.