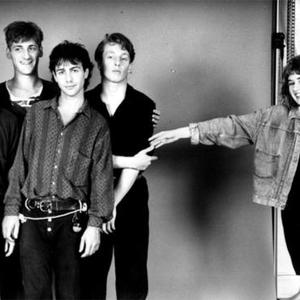 The Woodentops began 1983 with Rolo McGinty, Simon Mawby, Alice Thompson, and Paul Hookham. Known to busk and perform at South London art house warehouse type venues/parties . Rehearsing at Panni Bahrti's (then Charrington) warehouse at Clapham Junction, where the band worked until 1988. This was a hotbed of experimental film and graphic design, Panni desgining the bands vinyl / cd artwork / film and stage show.

The band progressed to conventional venues. At this time the bands electronic influences such as Kraftwerk, Can and Suicide became blurred by the band acheiving its own sound, a hybrid of hi speed hypnotic acoustic rock. Early reviews saw them as a type of Violent Femmes/ Feelies group but increasingly Rolo, the main writer, would write new kinds of song in a desire to not repeat themselves.

This never changed with record companies and reviewers finding them harder to pigeonhole.
the Woodentops recorded the first single Plenty for Food records in 1984, followed by support tours for artists such as Julian Cope and Everything But the Girl. John Peel picked the group for several BBC sessions on his show and championed the group untill his death. Frank de Freitas and Benny Staples became the definative rhythm section.

Rough Trade records signed the group, leading to a canonade of highly respected singles "Move me", "Well Well Well" and "Good Thing" . The album "Giant" saw them reaching the top 30 in the conventional charts, whereas all singles and albums attained number one spots in the independant charts. The live album "Hypnobeat Live" maintained the number one indie position for several weeks.

This live lp spawned "Why Why Why" one of the first big hits of the late 80s club scene in Ibiza. "Woodenfoot Cops on the Highway", the 2nd studio album, followed in 1987 and the band toured worldwide. Two singles from the album were released, and a final single "Tainted World" was power played on the NYC garage station by Tony Humphries. The group took a 15 year break, returning to perform again in 2006.

An extraordinary night at the London's Queen Elizabeth Hall in 2009 saw the band back on top form, collaborating with original album cover artist Panni Bharti. Original members Rolo McGinty, Simon Mawby and Frank de Freitas are joined by Paul Ashby on drums and ?ine O'Keeffe on keyboards. This was swiftly followed by a successful European tour with the band taking their unmistakable sound to Belgium, Germany and France, and appearances at Glastonbury and other UK festivals in 2010.

Woodentops is an old nickname for an acoustic guitar,the name of a UK puppet TV series from the early 60's, a nickname for the police force, or an idiot.

Stop This Car / You Make Me Feel (VLS)

Wooden Foot Cops On The Highway