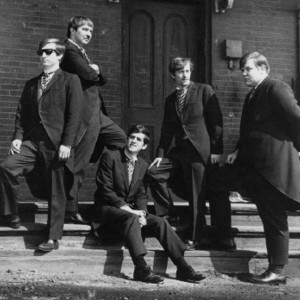 In the late 60s, a young band with a scorching style and a regional number-one song drifted into obscurity. Meanwhile the band's frontman, then-teenage Al Anderson, went on to a highly visible career that includes a decades-long stint with the hugely popular band NRBQ. Anderson moved on to become one of the most sought after songwriters in Nashville, and he's still going strong after 40 years of musical adventures.

This is the tale of The Wildweeds, a band that by all accounts was always slightly out of step with prevailing musical fashions. In retrospect, the band seemed to exist to set the stage for Al Anderson's future. But, as this new collection from Confidential Recordings, "No Good To Cry: The Best of The Wildweeds," reveals and affirms, the music that the group produced stands on its merits as an important contribution to the pop lexicon.

The influences which made the band seem in the minority musically are today acknowledged as masters of soul. True the Beatles and the Stones popularized and emulated crossover rock and roll artists like Chuck Berry. But The Wildweeds worshipped the likes of Ray Charles, The Impressions and Billy Stewart. Perhaps The Weeds were ahead of their time. Listening to "No Good To Cry: The Best of The Wildweeds," a compilation of the band's singles and unreleased material, shows just how fresh that take is today.

By the late 50s/early 60s, rock and roll had moved out of the south, and was not strictly the domain of the big cities any more, so this group of Windsor, CT boys was able to follow their musical ideals with impunity.

The Hartford area had a strong music scene. The young players typically shifted in and out of various combos. Bands with names like The Blues Messengers, The Altones, The Six Packs and The Futuras shaped them. The Weeds finally gelled in late 1966. Shortly thereafter, the name was expanded to The Wildweeds. The musicians included Al Anderson, of course, on guitar and vocals. Andy Lepak (drums), Ray Zeiner (keyboards), Bob Dudek (bass) and Martin "Skip" Yakaitis (percussion) rounded out the group in its definitive lineup.

While the band was still in its early stages, Andy Lepak's father, Alex Lepak Sr., a professional musician and teacher, started managing them. He provided a stabilizing influence, paying them a salary and instilling in them strong ideals about their music.

According to the fairytale trajectory, the band's popularity grew locally through enthusiastic fans at numerous live gigs. Al Anderson continued to hone his songwriting skill. (Thirty-four years later, in 2000, Al Anderson was named BMI Songwriter of the Year, but that's getting too far ahead. Back to 1966.) The Weeds went into Syncron Sound Studios on their own and cut some tracks, including "No Good to Cry."

The next chapter of the story finds record producer Thomas "Doc" Cavalier purchasing Syncron. Reviewing the archived assets of his new property, Doc was drawn to the energy and raw talent he heard from the Weeds rough recordings. He sought the boys out. He soon went further, refocusing and renaming the single, "No Good to Cry," and used his experience and influence to get them some industry notice. It worked. DJs around the northeast began to play "No Good to Cry." It was an unqualified regional hit.

Doc got them a deal with one of Chess Label's subsidiaries, Cadet. "No Good to Cry" proceeded to get wider airplay, but never received the huge national attention that it deserved.

Still more classic ups and downs followed. In an attempt to keep up with the evolving rock music of the late 60s, they tried a different musical direction, which culminated in the single "I'm Dreaming," released on Cadet Concept, another Chess offshoot. Again, good local response encouraged the band, but it seems the writing was on the wall. The band broke ranks with Doc Cavalier, changed personnel, and shifted their musical direction. This lineup of The Wildweeds released a self-titled country-influenced outing in 1970 on Vanguard that got little notice.

Sometime in 1969 Skip Yakaitis urged Al Anderson to come with him to hear NRBQ, a new band. Within two years, history began anew when Al signed on with the "Q." Twenty-two years later, that chapter came to a close.

Skip Yakaitis died in 1988. The Lepak family still lives in the Hartford area, and is still involved in music. Ray Zeiner now repairs pianos and still performs in Connecticut. Bob Dudek lived in Connecticut, and spent his years caring for the wildlife there. He died in June 2002 after a long battle with cancer. Thomas "Doc" Cavalier runs Trod Nossel Productions out of the same studio location that that he bought in 1967.

Fans of NRBQ have been assured of Al Anderson's talents for decades. Legions of them treasure, trade and discuss everything that the band has ever done. With the release of "No Good to Cry: The Best of The Wildweeds," Confidential Recordings is proud to contribute some long-lost, ever-so-deserving material, including rare and vintage photos and documents, to update and add to the legend.

No Good To Cry - The Best Of The Wildweeds