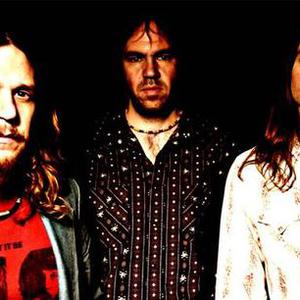 The Chicago-bred trio's organic, hard-driving synthesis of gutsy hard rock, gritty Delta blues, soulful backwoods boogie and down-home psychedelia has taken its hometown by storm. The frenzied power of the band's live shows has won them a fiercely loyal fan base, and their last CD Clava received substantial airplay across the Midwest. The Steepwater Band (guitarist / vocalist Jeff Massey, bassist Tod Bowers and drummer Joseph Winters) have played together since their teens in various rock and blues combos.

The Steepwater Band (guitarist / vocalist Jeff Massey, bassist Tod Bowers and drummer Joseph Winters) have played together since their teens in various rock and blues combos. The three musicians united to form The Steepwater Band in 1998, taking the name from a barge Massey spotted in Lake Michigan.

The young trio quickly found their own voice, progressing from covering Muddy Waters, Robert Johnson, and John Lee Hooker songs to writing and performing their own compelling originals. From the beginning, The Steepwater Band has been a relentless performing unit, playing an average of 125 shows per year -- headlining such prestigious Chicago venues as the Metro and the Double Door -- while expanding their touring base throughout the Midwest and beyond.

The band made its European debut in 2005, performing at the Azkena Rock Festival in Vitoria-Gasteiz, Spain, and has shared bills with acts as diverse as Buddy Guy, Wilco, Cheap Trick, Umphrey's McGee, and Deep Purple.

Revelation Sunday clearly draws the roadmap of The Steepwater Band's musical drive and direction. The songs on the record range from straight-ahead roots-rockers like ?Collision? and ?Steel Sky,? to a composition of Indian flavor called ?Dance Me A Number.? They even dabble in pop-sensibility on the infectiously catchy ?Halo,? along with the beautifully melodic ?A Lot Of Love Around.? Brand new and collectively written as a band, the song sequence on Revelation Sunday takes the listener on an aural trip through the band's present, while offering a glimpse of what might be in store for their future.

The creative electricity and contagious energy of the band is equally evident in their live performances, as their shows have been well-received by critics and fans alike. It's the unpretentious devotion to their music, and their commitment to achieving their musical goals without compromising the integrity of their musical vision, that makes The Steepwater Band such a refreshing discovery.

Turn Of The Wheel

Live At The Double Door

Songs From The 8Th Day