The State Of Samuel 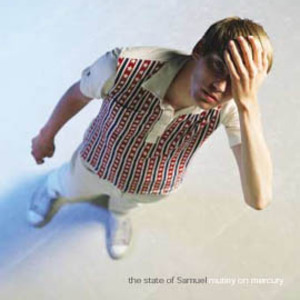 Samuel Petersson a.k.a The State of Samuel grew up in Varberg on the west coast of Sweden. Frustrated with the people and music climate in his hometown, he started recording songs on his 4-track machine and in 1996 he came up with the name "The State of Samuel". Several of these early recordings would resurface for his debut cassette "a 141 points average" referring to his personal-best in bowling at the moment.

At that time recording was just something Sam did in his spare time when he wasn't watching TV, playing C64, skateboarding, buying vinyl, playing in punk bands, going to school or learning how to play the sitar. Most of the songs from the first and second tape "the state of Samuel at the movies" were recorded in the garage of his parent's house in Varberg.

In 1999 Sam finally moved away from home to live on his own in Stockholm. Once settled down he finished the songs to the tape that would be known as "the state of Samuel at the movies".

2000 finally saw the release of "the state of Samuel at the movies" as well as 2 other tapes. Sam started to promote and sell it at local clubs in Stockholm hoping for a better response than in his small hometown. The state of Samuel played the first gig ever at Hellmut:jr in Stockholm where locals Johan Jacobsson (music journalist) and Hejhenrik (Rocket Number Nine records) were hosting the friday night activities. Johan, a believer in true, pure and primitive 4-track music like local legends "Phlegm" and "By coastal caf?" was probably one of the first people to discover and support the state of Samuel. 2000 also saw the formation of The goblin universe, a three-piece where Sam would have guitar and vocal duties.

2001 saw some minor recognition starting for both the state of Samuel and Goblin universe. The "Here comes Gnome" 7"/Goblin universe, became a small club- and indiehit around Stockholm opening the doors for the state of Samuel tape "Slick-Johnson expedition" and the EP debut "Santa Barbara EP"(Modesto Records). The "Slick-Johnson.." tape was a small instant success and has to date sold a few hundred copies just by mailorder alone. This year state of Samuel started playing bigger venues and to more people than before for example the Love, wine and revolution festival(Benno festival) outside Norrk?ping with other bands such as Trembling blue stars, My favorite and Aerospace etc. With it's unique swedish sound "The Santa Barbara EP" received great reviews all over the world and was sold-out within a year. Other things that happened in 2001: The busy band, Sam's new side-project with Amanda from Free loan investments was formed.

In 2002 while working on his forthcoming CD "Mutiny on Mercury", Sam was contacted by Japanese label Escalator about releasing a "best-of" compilation with songs from the 7" and tape releases so far. "Swedish Metal Aid"(named after the swedish hairmetal charity supergroup for africa), a CD/LP with 25 songs saw the light of day in July 2002. This month also saw the release of the self-titled busy band debut EP. After a successful gig at the Emmaboda festival The goblin universe parted ways due to lack of new inspiration and various drug problems.

"Mutiny on Mercury", the first "real" state of Samuel fullength was released in 2003 on Strings of Nashville(Sweden) and Humblebee recordings(Canada). To support the record the state of Samuel embarked on a north american acoustic tour including the cities Calgary, Edmonton, Vancouver, Seattle and San Francisco. In September of 2003, the busy Band released their second EP entitled "A voice like yours". The same month Sam put together a backing band for the state of Samuel consisting of Isak(Speedmarket Avenue) and Matti and Peter(both Penti).

In 2004 the State of Samuel continued to write and tour; Shows in Sweden and in september a small US tour of the cities Boston, NYC, Philadelphia and Washington D.C. December 2004 also saw the release of another affiliated release: The Estate of Samuel ?Fast Love? on bedroom recordings.

In april 2005 Kittridge Records released the compilation Homemade Hits vol.2 which featured the song "Square Roots". This was the first release in over 2 years from the state of Samuel. In the fall they played a show in Glasgow, UK with Speedmarket Avenue and at the end of the year Sam did a few acoustic gigs in the US. Work on the forthcoming album continued.