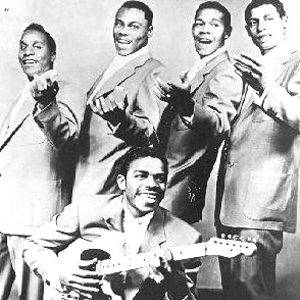 When you go back to the great early days of group harmony history, you find so many great groups and so much great talent. Many of the originator groups came out of New York or Los Angeles and a few came out of the Midwest via Chicago. Maybe the finest group to hail from the Windy City area (Gary, Indiana, actually) were the Spaniels with legendary lead man Pookie Hudson. They were a truely innovative group. Many group harmony historians say that the Spaniels were the first group with a true lead singer - as Pookie would sing behind one microphone and the rest of the group around a second.

James "Pookie" Hudson has been singing since he was 8 years old. His early influences were groups like the Charioteers, the Mills Brothers and the Ink Spots. "Then along came Sonny Til and the Orioles," Pookie recalls, "and the music kind of changes at that point." At the age of 13, he started singing at church when a friend named Billy Shelton asked him to join the choir. Pookie, Billy and a third guy named Calvin Fox would later form their own group called the Three Bees singing gospel and contemporary songs. They added a fourth member - William Dooley and they became the Four Bees. The other three members graduated before Pookie. Meanwhile, four other guys from Roosevelt High School in Gary, Indiana, Ernest Warren (first tenor), Opal Courtney, Jr. (baritone), Willie Jackson (second tenor), and Gerald Gregory (bass) started hanging out and singing together. These four later approached Pookie - a fellow classmate - to sing with them. One of their first performances was a Christmas talent show where they performed a song called I Will Wait as Pookie Hudson and the Hudsonaires. That was 1952.

Liking what they heard, the guys continued singing together. But being the modest kind of guy that he is, Pookie didn't like the idea of his name being out front of the group. So the group decided it needed a new name. They were practicing one day when they asked bass man Gregory's new wife her opinion of their sound. As Pookie recalls, this was a mistake," for she commented that they sounded like a bunch a dogs! Ha! From that, the group decided to name themselves the Spaniels rather than go with what everyone else was doing at the time - a bird name group!
It was not until 1953 that the group was actually discovered. They visited a couple - James Bracken and Vivian Carter Bracken - who were working for the local Chicago radio station WWCA. The Bracken's liked what they heard from the group and decided to make them the first group on a new label they were starting. They named their label Vee Jay (after the initials of their first names). Pookie recalls that they really didn't even realize that it was all about - they had just seen how "people had been carrying on about artists" so they were very excited about recording. In May of that year, the Bracken's recorded the group doing Baby It's You b/w Bounce (Vee Jay 101) which was released in July of 1953. Baby Its You is a little jump number which some say was copied by later groups in some of their own recordings. The song would later hit number 10 on the national R&B charts.

The group went back into the studio at Vee Jay and recorded their follow up record Bells Ring Out. It was not a successful. Amazing as it sounds today, Pookie says that despite the regional success of these records, the group's members were still working day jobs like in the Midwest steel mills while performing on the weekends. In the spring of 1954, the group recorded a song written by Pookie. Pookie describes how he used to hang out at his girlfriend Bonnie Jane Davis' house into the wee hours of the evening. Around Midnight, her mother would eventually tell Pookie to go home saying "your Momma might not care about you being out at twelve o'clock at night but she didn't mean you to be here!" On his way home from those visits, Pookie penned the now famous Goodnight Sweetheart Goodnight. Pookie says that the group really didn't want to do the song - they thought it was just a "little silly song" sort of like a nursey rhyme (funny they should think that as the song was used for just that purpose in the 1980's film Three Men and a Baby). But the Bracken's insisted and the group relented. Thank goodness for that! Upon its release by Vee Jay, the group had a big hit reaching number 5 on the national R&B charts. It was covered by 8 other groups as well at the time many of which also had major success with it including the McGuire Sisters whose version went to number 7 on the national charts! When asked if this bothered them, another group taking their record and having success with it, Pookie replies that "we didn't understand the consequences of other groups covering our record. And it was at a time when black music wasn't played on white stations." Alan Freed, probably realizing just how great a song it was, wanted to add his name to the record. Pookie rightfully refused and as a result Freed never played that or any other Spaniels records and they never played any of his shows.

The group's next effort for Vee Jay was Let's Make Up followed in May 1955 by Do Wah and You Painted Pictures. That last record reached number 13 on the R&B charts. At that point, Courtney was drafted and was replaced by Cal Carter and eventually James "Dimples" Cochran. Ernest Warren was later drafted and the group went forward as a foursome. At that point, with a wife and a baby and not that much money coming in from singing, Pookie would leave the group for a year and would spend the time working for a company named General America making railroad box cars! At night, after work, Pookie would lay staring at the night sky and it was during this time that he was inspired to write Peace of Mind. After a year, Pookie returned and they recorded that great tune along with the Otis Blackwell tune Please Don't Tease, Tina and Stormy Weather. And the Spaniels were back.


As for their times on the road, Pookie recalls some of the problems encountered by a Black group travelling throughout the still segregated United States, especially the South. "We were pulled over by the police and intimated because our car license plates would show that we were from Illinois." It didn't help that they had the name of their group on the side of the bus. Being the segregated 1950's, the group was not allowed to stay in all-white hotels and find itself sleeping in the bus or in the home of Black families that would take them in. Still, the group had some memorable performances at places like the famous Apollo Theatre where they were a staple for many years. In fact, the Spaniels were on the very same tour as Buddy Holly, Ritchie Valens and the Big Bopper on the Day the Music Died in February of 1959. The three had split off to do their fateful separate show. The Spaniels continued on the tour with Frankie Lymon, the Drifters, LaVern Baker, Paul Anka, and many other artists. Pookie remembers: "the Flamingos, the Drifters....we all became close friends. We weren't really into the White acts....we didn't understand their music...it was whole lot different. Even though people were trying to tell us it was the same, it definitely wasn't the same." "We were really doing it for the love it....we didn't get rich doing it," recalls Pookie. As for the emergence of Rock and Roll in the later 1950's, Pookie says that "all they did was change the name of it...of what we started...."

In 1958, the Spaniels were in Washington, DC performing at the Howard Theatre when they met a gospel group called the Nightingales. The Nightingales had a song they were interested in recording but because they song had suggestive lyrics (at least suggestive for the times) and they were a gospel group, they simply couldn't do it. They sang it for the Spaniels and asked them if they were interested in it. They took it back to Vee Jay records and sang it for them. Vee Jay passed because they thought it was too suggestive. The song? The Twist which as we all know was recorded by Hank Ballard and then by Chubby Checker. While it was probably a mistake to pass that record up, Pookie states that they probably would not have when into recording the song with the right frame of mind because they did not envision it being a dance record. It may have been another song if the Spaniels had done it.

In 1960, Ernest Warren rejoined the group which was now Pookie, Warren, Gerald Gregory, Bill Carey, and Andy McGruder (who had sang lead with the Five Blue Notes). It was this formation of the group that recorded the last Vee Jay side - I Know in 1960. Pookie did some solo work with Little Anthony's Imperials backing him up in 1962 and Pookie Hudson and the Spaniels recorded for Parkway records in 1962 doing the snappy little number John Brown. There were two records released in the early 1970's under the name of the Spaniels. This group consisted of Pookie, Charles Douglas (first tenor), Alvin Wheeler (second tenor), Alvin Lloyd (baritone), and Pete Simmons (bass). It was this group that did the remake of Goodnight Sweetheart Goodnight that was released in 1973 on Buddah. The group had one last record on Canterbury in 1974 doing a remake of Peace of Mind.

Today - Pookie is one of the most active original group harmony artists. His new Spaniels group were previously a Washington, DC contemporary group called the Fellows. They now back up Pookie on his current peformances including a spot on Doo-Wop 50. "They sing very well," comments Pookie, "and they keep the tradition going." Pookie just finished releasing a new blues CD in which he teamed up with Lewie Lymon (of the Teenchords fame) and Bobby Lewis. Can't wait to hear that recording - watch for it in a store near you!