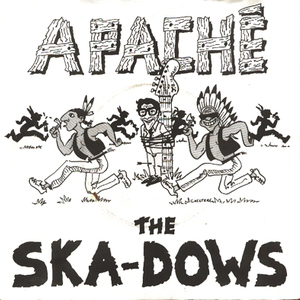 All the way back in 1978 Tony Sibthorpe formed underground Ska band the Skadows and first recording APACHE (a cover version of the old Shadows hit and a manic version at that) was punted around along with other tracks to all the major record companies. Chas Chandler of Animals fame (as well as being Jimi Hendrix and Slade manager) had newly formed Cheapskate Records. He loved the track so much he released it in its original demo form.

Unfortunately it wasn't until late 1979 that APACHE hit the streets and the Skadows were accused of jumping on the Two Tone bandwagon and didn't get the recognition that they deserved as they didn't really associate themselves to that scene but were more into the real sixties bluebeat and ska (Maytalls Skatellites Prince Buster etc). Five singles more followed alongside the now acclaimed SKAD FOR LIFE album before the band finally called it a day.