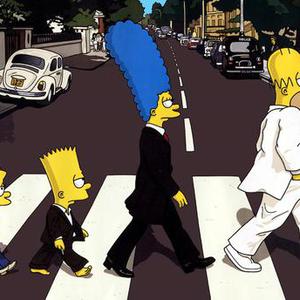 The Simpsons is an American animated television sitcom created by Matt Groening that has aired on the Fox Broadcasting Company since December 1989. It is a satirical parody of a middle class American lifestyle epitomized by its eponymous family, which consists of Homer, Marge, Bart, Lisa and Maggie. The show is set in the fictional town of Springfield, and lampoons American culture, society, and many aspects of the human condition.

The popularity of The Simpsons led to the release of the 1990 double platinum album The Simpsons Sing the Blues, which contains original songs performed by the cast members of the show as their characters. The album spawned two hit singles?"Do the Bartman" and "Deep, Deep Trouble". A less successful sequel, The Yellow Album, was released in 1998.

Go Simpsonic with the Simpsons

The Simpsons: The Yellow Album

Songs In The Key Of Springfield

Do The Bartman (CDS)