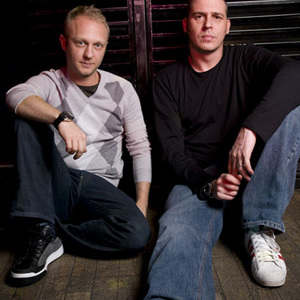 The Shapeshifters are Simon Marlin and Max Reich. Party people at heart, the pair met when Simon signed Max to the Down Boy record label that he worked for. Musically, Simon found his enthusiasm for house on the dance floor in the late 80's and early 90's promoting nights and DJing, while Max got into production via a passion for techno honed whilst throwing illegal raves in his native city of Gothenburg. In 2008 they found a new home at Defected Records, leaving Positiva after 4 years. Since joining Defected they have already made their mark at the world's leading house music label.

Their last two productions, ?Treadstone', a techy but uplifting track, and a re-work of Orbital's classic ?Chime' track have excited the duo's existing admirers and found them new champions worldwide. Stripping away the live sounds and layering fewer elements has left The Shapeshifters feeling reinvigorated about their sound. Their critically acclaimed ?The Shapeshifters - 'In the House'' DJ mix compilation was another success in an already impressive portfolio. Aside from 3 top 10 hit records ('Lola's Theme', 'Back To Basics' and 'Incredible'), a BRIT Award nomination, a bucket full of remixes and productions for the likes of George Michael, Faithless, Candi Staton, Frankie Knuckles, Christina Aguilera and Moby, the pair show no sign of slowing down. In fact it is the opposite; they had the best selling house cut on Beatport in 2008 (?Lola's Theme (08 Re-Edit)') and have just delivered remixes for hottest band on the planet Empire Of The Sun (?We Are The People') and mixed Kleerup feat. Titiyo (?Longing For Lullabies') ? both records that are sure to be making a big splash in the fast approaching Ibiza season and beyond. The Shapeshifters are currently working on new material for Defected which is set for release in Spring 2009 and also hold DJ residencies for Defected @ Pacha (Ibiza ? Summer 2009) and at their long running party hang ?Nocturnal', which runs alongside their own Nocturnal Groove label.


?Having made the decision to return to what we enjoy and feel we're best at, what we make and what we play is much more in tune with each other,? says Max. And with the amount of gigging they do it's a good philosophy to have ? as well as their London home the boys are in demand around the UK as well as the world: their diary is crammed with dates from Australia to Canada, Europe to the Far East and everywhere else in between. ?Signing to Defected has given us a new lease of life and we're so immersed in it,? says Simon, ?but we're also excited by clubland's eagerness to hear music with a bit more depth and melody to it. If we want to make underground music and express ourselves that way they're happy ? if we do make something radio friendly then it's still the perfect home for us.?


The Los Angeles based underground collective of hip hop artists, found under the name The Shape Shifters.

Life Is A Dancefloor (CDS)

If In Doubt Go Out CDS