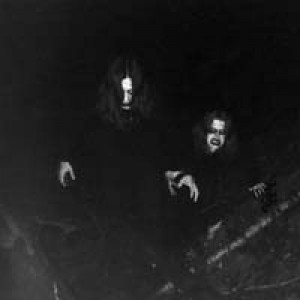 Aphoom Zhah is a band from Belarus.The band was formed in 1998 under name DISCLAIMER. Musical basis was Black/Death Metal classic of -80s and early -90s. In the winter of 1999 the band was renamed to APHOOM ZHAH. And in this period the band was very much influenced by BATHORY, VENOM, DARKTHRONE, MAYHEM and etc. The first line-up was: Vajug (drums), Cold Flame (guitar) and bass/singer who left the band very soon because of disagreements. In the end of 1999 Nav (bass, vocal) has joined the band.

In such line-up in the beginning of 2000 debut mini-album ?Eternal pain? was recorded and released the same year by Possession Productions as MC PS08. But Nav left the band very soon. He was placed into the mental hospital because his psychological fits became more frequent. His future fate is unknown. Music of the debut was classical Black/Death Metal. It is highspeed, raw and unpretentious. Twilight One from Belarussian Black Metal of Death band KRUK wrote lyrics for 2 compositions. In 2001 the new album was ready but it was doomed never to see the light? 2002-2003? Silence. Depression. Alcohol. Edge. The limited to 1000 copies split-CD APHOOM ZHAH/SMIERCIESLAU - ?Eternal Pain/Biessmjarotny Czorny Mietal? was released by Greek Unisound Recordings in the end of 2003. The international version of this Split-CD with a different design was released by Colombian Tribulacion Productions in the beginning of 2004. The work on material of 2001-2002 period started in 2004. Some fragments were rewritten. In the winter of 2004 the CD ?Symbol Of New Aeon? was re-recorded and mixed. Mr. Nox, Ryks Asirg from Kult KRUK and Tod Morton from SCHWARZE SONNE took part in album recording. The CD was released by Possession Productions as CD PS21 in November 2005. The nowadays line-up of APHOOM ZHAH is: Vajug (drums, vocals), Cold flame (guitars, bass, effects). The work on an absolutely new material started in 2005. Even more Aggression, even more Fear, even more Evil! It is never enough!!! Zhah in translation from Belarusian means frightening