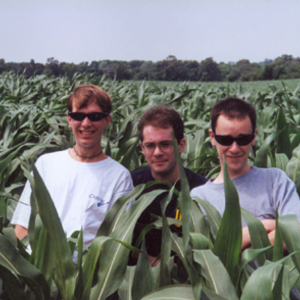 From 1998 to 2003, The Scrubs were one of Cincinnati's premier punk bands and live acts. This trio played a unique mix of pop, punk, and rock with influences ranging from the Descendents to Radiohead and just about everything else under the sun. They were well known around the Midwest for their entertaining live shows and occasional 80s covers, playing with soon-to-be big bands like Alkaline Trio, Midtown, Ultimate Fakebook, Piebald and more.

Guitarist Jamie Mandel is now running Nice Guy Records. After a brief hiatus, in 2004, Nice Guy Records released a brand new EP entitled "Return To The Basement" and in 2007 "The Scrubs Complete Discography" with everything they ever recorded from 1999-2003. (Interpunk.com)

Cincinnati punk trio the Scrubs pack a single song with more pop hooks than most bands can fit on an entire album. Pick slides, machine-gun drums, yowling vocals, and a hyperactive ear for melody keep these mad lads bouncing around your cranium all night long. Revel in the ecstatic sound of their angst. (Download.com)

Return To The Basement