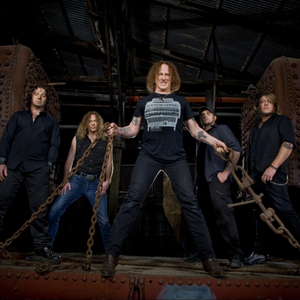 The Screaming Jets is a hard rock band from Newcastle, Australia. The band was formed by three former members of Aspect, singer Dave Gleeson, bass player Paul Woseen and guitarist Grant Walmsley, in 1989. Along with second guitarist Richard Lara and former Radiators drummer Brad Heaney, the Screaming Jets won a national Battle of the Bands contest run by the youth broadcaster Triple J and a resultant EP, "The Scorching Adventures of the Screaming Jets" scored an ARIA Award nomination.

Winning a deal with Sydney independent label rooArt, the Screaming Jets released their debut album All For One that spawned a top-charting hit single in "Better" along with two others, "Shine On" and "Stop the World" that were only moderate performers and the controversial "FRC" that featured guest vocals by various members of Mortal Sin, The Choirboys and The Angels.

Following the album's release, the Screaming Jets went to the UK where they based themselves for over two years, touring there and throughout Europe with a variety of hard rock and heavy metal bands. During a series of shows with Ugly Kid Joe, Heaney was fired and replaced for the rest of the tour by one-time Judas Priest drummer Dave Holland.

The band's next album Tear of Thought, which featured Heaney's drumming, was initially slow to gain acceptance until a cover of Boys Next Door's "Shivers" saw the Screaming Jets back in the charts. Heaney was permanently replaced in the line-up by former BB Steal drummer Craig Rosevear and after a US tour with Def Leppard Lara was replaced by Melbourne musician Jimi "The Human" Hocking, who had previously fronted his own band, Jimi Human and Spectre 7, that released an album and two singles at the turn of the decade.

While the Screaming Jets remained only moderately successful overseas, in Australia they were one of the top-drawing live bands of the early-mid 1990s and perhaps the last remaining example of the pub rock acts that had ruled the country's live scene in the late 1970s - mid 1980s. While their single releases rarely scored high on the charts, they won significant airplay on rock radio and the band's tours were wildly successful. In 1995 the Screaming Jets' self-titled album made history when it became the first CD launched via live Webcast.

By the late 90s the Screaming Jets were touring less often and had not released an album of new material since 1996. Hocking had left in 1997 to be replaced by former Judge Mercy guitarist Izzy Osmanovich and after an extensive Australian tour in 2000, Rosevear left to be replaced by Col Hatchman. Although no longer the force they had once been, the Screaming Jets could still draw large crowds and in 2001 were selected to tour with Kiss and Alice Cooper; at the end of that year the band announced an extended break from all touring and recording, playing a final series of shows.

In December 2002, the Screaming Jets did another brief tour in support of a self-financed live album that had been recorded the previous year, but then did not play live again until mid-2004. Since then have continued to record and tour, though more sporadically than during the early 1990s and have also signed a record publishing deal with Universal Records.

Heart Of The Matter (EP)