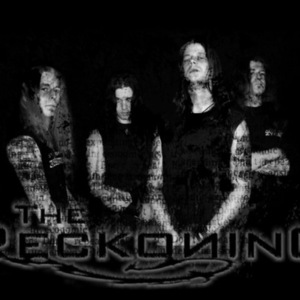 Originally formed in 1993 under the banner Infernal Legion, the band marched viciously through the huge amount of shit that life and society demands when you're young and angry by releasing a couple of demos, a full-lenght 'Sculptured Humans' (2001) and a mini album 'Annihilate' (2003) and started to build up a reliable live reputation in the european underground by supporting bands as Sinister, Morbid Angel, Marduk, Sodom, Deicide, Vader and many other highlights in extreme metal.

The raw, yet melodic black metal of the old days improved on each album in terms of musicianship, songwriting and productional matters but it wasn't untill the release of the 2004 'Annihilate' mcd that the band started to realize their true potential. On that album, THE RECKONING began to incorporate a more brutal and technical approach to their previous black metalsound. Eventually, the album can be described as the blueprint for things to come.

With that experience as a great foundation, the band decided to change name into THE RECKONING in January 2006. Mainly because of the need for a kind of fresh start and the intention to take things to a higher level on musical grounds.
'Deathlike Millennia' (2006), as their firstborn was titled, received positive reviews by worldwide press, magazines and e-zines and shows a band more mature and stronger then ever. The album was recorded at Poland's Hertz Studio who previously delivered maximum audio quality to acts like Decapitated, Vader and Hate. Mixing their experience with the band's highly intense fusion of black, death and thrashmetal would end up in a new deathstrike to their previous limitations. 'Deathlike Millennia' was generally praised for it's international potential, originality and splendid musicianship and got linked to a wide variety of bands like Marduk, Decapitated, Angelcorpse and Morbid Angel.

In June 2008, the band released a new album, called "Counterblast", which contains 10 songs (including intro) of pure hatred and destruction!!