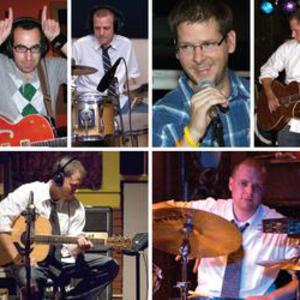 PLEASE NOTE, THERE ARE TWO DIFFERENT BANDS CALLED THE REBEL SET- THE REBEL SET - Dayton, Ohio The rock band, The Rebel Set, was formed in early 2006 by Tom Gilliam (vocals/lead guitar), Gavin Spencer (vocals/bass/harmonica/accordion) and Jason Johantges (rhythm guitar). Feeling they needed to expand the band's musical diversity to capture the sound they were seeking, they soon added friends of the band Adam Kempf (drums/trumpet) and Ken Hall (keyboards/trombone), rounding out the final band lineup.

The rock band, The Rebel Set, was formed in early 2006 by Tom Gilliam (vocals/lead guitar), Gavin Spencer (vocals/bass/harmonica/accordion) and Jason Johantges (rhythm guitar). Feeling they needed to expand the band's musical diversity to capture the sound they were seeking, they soon added friends of the band Adam Kempf (drums/trumpet) and Ken Hall (keyboards/trombone), rounding out the final band lineup. By November, the band had completed their first two demo tracks for the songs ?130? and ?Radio? and had played their debut live show to a sold out crowd at The Nite Owl in Dayton's Historic Oregon District.

Through the rest of 2006 and much of 2007, The Rebel Set tightened their sound and added many fans as they continued to play live shows around the state of Ohio. In August of 2007, The Rebel Set headlined the Official After Party for the National Rollergirls tournament taking place in Columbus, Ohio. The time the band spent together practicing and playing shows allowed them to create a wealth of original music. This led them to the recording studio in August to record their full length debut album.

Working with engineer/producer Patrick Himes (who engineered the Ryan Adams debut solo album ?Heartbreaker? plus albums by fellow Dayton bands Shrug & Flyaway Minion) in August and September of 2007, the band was able to record 11 original songs to complete their album debut, Ghost Town Silence. On March 29, 2008, The Rebel Set played the ?Ghost Town Silence? album live in its entirety during their CD Release Party to a completely sold out crowd at The Oregon Express, located in their hometown of Dayton, Ohio. The show broke a 24 year attendance & alcohol/food sales record at The O.E. for a non-holiday event (second only to Saint Patrick's Day).

Currently, the band is writing new songs for the follow up to ?Ghost Town Silence? and playing live shows in Ohio and beyond for the rest of 2008.

?The song 130 was written about the death of James Dean. 130 was the racing number of James Dean's Porsche Spyder. Dean had a fatal accident in the Spyder en route to a race in Salinas, California.
?Gavin Spencer and Jason Johantges have appeared in the music video ?Sweep the Leg? by No More Kings.
?Gavin, Jason, and Tom run a website proliferating a Zabka way of life.

The Rebel Set is a three piece garage rock band from Phoenix, Arizona. Forming in late 2006, The Rebel Set combined their love of the reverb drenched guitar sound of the early 60's with early punk and 90's low-fi garage rock. The Rebel Set are heavily influenced by such artists as Link Wray, Dick Dale, Duane Eddy, The Ramones, The Rezillos, The Drags, and Rocket From The Crypt.

The Rebel Set Released their debut four song EP on Silver Hornet Records in October of 2008. The record received radio airplay in the US, Canada and Europe and received many rave reviews. The band made several appearances on compilations throughout 2009 as well as recording six songs for Le Scene which aired on Radio Phoenix throughout the summer of 2009.

In late 2009 the band took some time off from performing to record their first full length album. The band began performing regularly again in early 2010, including a performance at the Neon Reverb Festival in Las Vegas, in anticipation of their albums release. In April of 2010 the band returned with their first full length album. The band will be touring on and off throughout the summer in support of their new record.