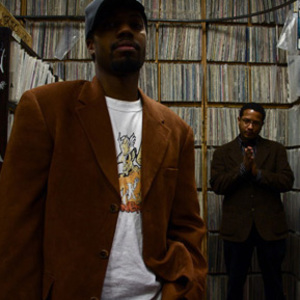 THE PRIMERIDIAN, a hip-hop based, power group consisting of Simeon Viltz (See-Me-On), and Darshon Gibbs (Race), hail from the eclectic, historical music scene of Chicago. With musical influences from blues and R&B, to house and acid jazz, the primeridian, backed by the sounds of dj Jamal (Jaytoo) Jeffries a.k.a "ThedjyomamaLuv", fuses these influences into a soulful, jazzy, acid-funk sound independent of musical genres and classifications pushing hip hop to new levels of exposure, experimentation and expression.

With thought-provoking lyrics, a touch of humor, skilled production/musicianship and years of explosive live performances, the primeridian takes a stage by storm with energy, emotion, and experience moving crowds of diverse audiences (young and old), various musical preferences and tastes.

From "b-boys on the street" to "grown men with responsibility", they address harsh, contemporary themes with positive inspiration for the youth raw with refined experience. Disciplined, educated artists who work have studied and performed with numerous artists of various genres including the legendary Run-DMC, Redman, Talib Kweli, Erykah Badu, Common, Fareed Haque, Frank Orral, Bobby Irving, Kahil El Zabar, Ari Brown, Dizine, and Tamara Shaw and many others. the primeridian has remained active in the community working extensively with youth & performing at anti-war demonstrations across the nation and standing in solidarity with the struggles of the oppressed peoples in the world.

Simeon AKA 'V', a native of Chicago's southeast Hyde Park area, represents the 'the soul' of primeridian. Born to a family of gospel and jazz artists, V was 'raised in music.' His work centers on the search for spiritual alignment and growth of character amidst the mayhem of urban madness. With metaphysical imagery and cultural history, V takes the audience on a soul filled "mental ride." He encourages the audience to read between the lines and not just look at the face value of things, leading them to a space of original thought . . . with spirituality that is collective in essence but objectively different.

Darshon "Race" Gibbs is an electrifying and captivating emcee able to entice those in earshot with lyrical prowess, depth and a distinct, strong voice. Born on Chicago's infamous South Side, Race gave his first rap performance during a school play in the 7th grade. Since that day, there has been no turning back. Determined to share his gift of poetic wit and sarcastic wisdom, he began doing local radio shows and performing at local venues. Race is a mix of the old and new - the new essence, a combination of late 80s and early 90s themes done in the 21st millennium way. He is like a loaded gun; he can go off at anytime. Come take a ride on the soul side of the spectrum, walk with Race, hear and see something new.

As a hip-hop artist with exceptional lyrical skills to his credit, original member, Jaime "Tree" Roundtree has lived his life devoted to making music. Teaching and performing have many parallels for Jaime Roundtree. Though now focusing on being a teacher, all eyes are on him as he makes connections with his students as an educator and his audience as an artist.

"I'll Meet You in Greenwich" is a compilation of works from 1995 to 2001. The 2005 release of "Da All Nighta" takes listeners on a soul-filled "mental ride" and is filled with conscious lyrical content that is honest and genuine, inspiring critical thought, while touching on topics from politics, to relationships, to the present state of hip hop. With the 2008 release of "Da Mornin' Afta", primeridian stays true to the soulful and smoothness of their sound, but introduces an edgier side with vocal variety and enhanced creativity.